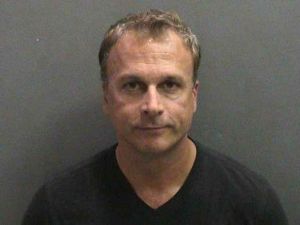 Tamra Barney’s soon to be ex-husband Simon Barney was arrested early Tuesday morning on a domestic violence charge by the Orange County, California Sheriff’s department at 12:30am and taken into custody on $10,000 bail. The argument leading to the altercations was over a custody battle about their dog!

Tamra and Simon have been sharing custody of their small dog and he brought the dog back to her house Monday night.

“He was angry and threw the leash at her and hit her with it,” a source with knowledge of the case told RadarOnline.com exclusively.

“The leash hit Tamra. She wasn’t sure what to do,” the source told RadarOnline.com. “But she knew she couldn’t tolerate the violence. She called the cops.”

Simon apparently texted her after the incident, and after he left her house, saying that the leash slipped out of his hands.

“He knew he had a problem at that point,” the source said.

Simon was upset with Tamra because she planned a birthday party for one of their children at her new house. Even though she invited Simon, he was angry and felt the party should have been held at a “neutral” location.

Simon will be arraigned Tuesday. At that time, he is expected to enter a plea to the charge.

More in Real Housewives Of Orange County (314 of 364 articles)