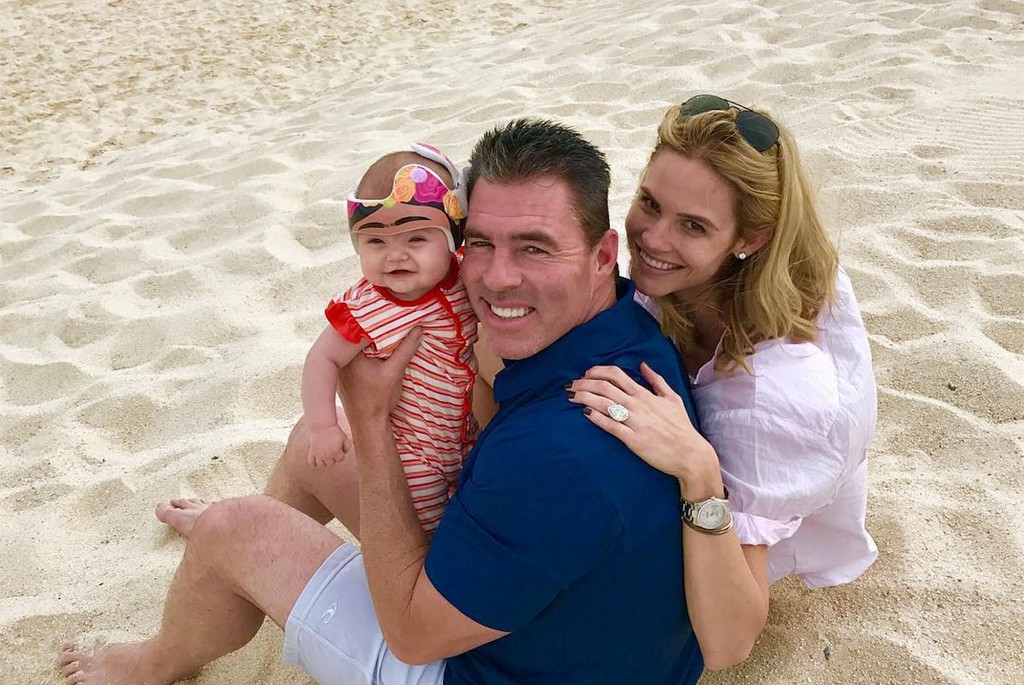 The 33-year-old reality star announced on her blog Monday that she’s pregnant with her second child, a baby boy, due in June 2018.

Meghan and Jim, married in 2014, welcomed their 1-year-old daughter Aspen via in vitro fertilization in November 2016. Jim has four other children from two previous marriages

Meghan shared the good news with her RHOOC castmates at the RHOOC reunion, which was filmed in October and airing its final part Monday.

“So we’ve made it to the announcement: Aspen is going to be a big sister! It was so hard for us to keep it a secret from everyone especially since we shared our entire IVF journey with Aspen on RHOC from the very beginning. Tonight on the RHOC reunion you’ll see that I’m only one month pregnant, but that was filmed five weeks ago: we are now ten weeks pregnant (and I’m feeling every bit of it)! Because you won’t see any of our current journey on RHOC, I’ll share our beautiful journey with you here!

When Aspen was only a few months old Jimmy and I knew we wanted to add another baby to the mix. Yes, Aspen has half-siblings but we wanted her to be able to share in the joy of waking up to a sibling every day of her life. Plus her half-siblings are completely enamored by Aspen and they LOVED the idea of expanding our family even more.

We began the IVF process over the summer. We started from scratch because we really wanted to have a boy (Jimmy has a total of five girls and one boy) and we only had two frozen female embryos. This was a difficult decision for us. Jimmy was adamant he didn’t care about the sex of the baby, he just didn’t want me to have to again endure the emotional rollercoaster that comes with IVF. (If we had decided to transfer one of the female embryos my drug regimen would’ve been much less involved than full blown IVF.) But I insisted: I was more comfortable with going through IVF again since I knew what to expect. So we moved forward with IVF.

Opposite of my first experience with IVF, this time I was anxious for the emotional toll while knowing I could handle the physical repercussions. Additionally, I had reliable companionship this time around with Jimmy by my side, my trusty furry companion Girly Girl and of course, baby Aspen. It may seem silly to mention Aspen and Girly Girl but this support system was everything to me during round 2 of IVF. (Side note: If you remember from RHOC, during my first round of IVF I entered the worst depression of my life, probably due to the erratic hormones combined with loneliness. I was able to wean off my depression meds halfway through my pregnancy with Aspen which directly corresponded with when I got Girly Girl, and I haven’t been on a lick of antidepressants since then. Dogs are truly woman’s best friend and medicine for the soul… and apparently clinical depression!)

We began the IVF process after baseball season ended so Jimmy could be ever present – it was so dumb of us to do round 1 of IVF in April at the height of spring training. We were so anti-overlapping-IVF-and-baseball that we even had to shift our original schedule due to The St. Louis Cardinals’ schedule!

All in all I produced ten mature eggs, all ten fertilized, and all ten made it to zygote stage (this is INCREDIBLE!). At this point we again did PGS (preimplantation genetic screening), which not only uncovers which embryos have genetic abnormalities but also identifies the specific chromosomes that are additional or missing. The reason for this test is so that we do not transfer genetically imperfect embryos because their chances of making it to term are low: most miscarriages are a result of chromosomal abnormalities. We can essentially eliminate the risk of miscarriage due to chromosomal abnormalities by transferring completely healthy embryos determined by PGS. The way I see it is that if I get pregnant with a PGS embryo my chances of miscarriage are virtually eliminated except for an act of God. PGS also uncovers the sex of each embryo. Of our ten embryos, only four were chromosomally NORMAL: three boys and one girl! We were a bit shocked that 60% of our embryos were abnormal but so happy to have four VERY strong and perfectly healthy embryos.

Fast forward to today and I am pregnant! I’m not feeling the greatest but we know that it will all be worth it in the end. Aspen will make a fabulous big sister at only a year-and-a-half old in June 2018! Oh, what about the biggest question: Boy or girl? Think blue this time around!”

Meghan wrote on her blog.