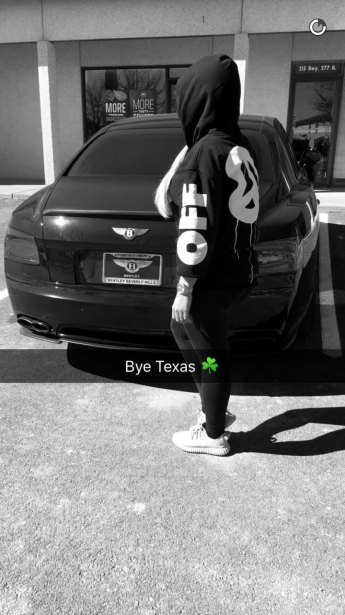 In the love story everyone wants to win! Rob Kardashian allegedly drove 1,377 miles from Los Angeles to Austin to personally pick up freed girlfriend Blac Chyna from an Austin, TX prison.

According to TMZ, Rob drove the Bentley 26 hours to pick Blac Chyna up. He started the journey minutes after Chyna got arrested for public intoxication at the Austin International Airport Friday at 4:20 PM Texas time -2:20 PT. The picture was posted at around 12:20 PM PT 22 hours after her arrest. Why didn’t she fly?

The drive is 19 hours minimum. The Bentley is confirmed as being the same one ROb was driving when he and Blac Chyna were spotted earlier in Los Angeles last week.

According to TMZ sources the Kardashian family is alarmed as they believe the road trip is a clear sign Rob is acting irrationally, and they’re worried drugs or alcohol might be involved.

Bentley’s aren’t known for being good on gas, what did that ride cost? A Bentley does about 17 mpg. Sad, sad, sad. Charyer a private plane next time!