Robert Griffin III Cuts Off Wife’s Credit Cards As She Demands $36,000 A Month 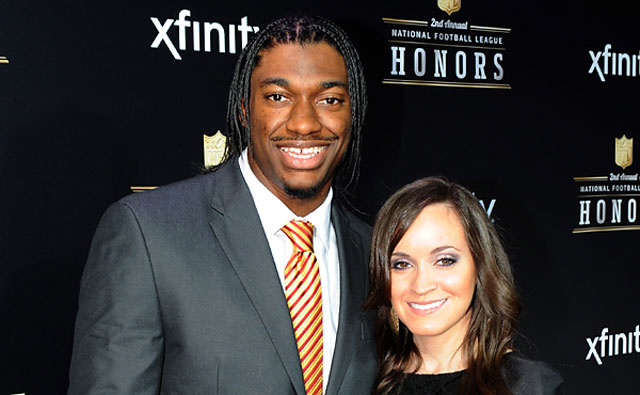 Robert Griffin III just announced his engagement to pregnant girlfriend Grete Sadeiko, but he is not divorced from wife Rebecca Liddicoat-Griffin.

Rebecca recently filed court documents showing that they are still hashing out a financial settlement. She claims she spends almost $36,000 a month on maintaining herself, their daughter and homes in Texas and Virginia.

Rebecca said that Robert has cut off access to her American Express Platinum credit card and withheld money from her, which meant that she couldn’t pay her utility bills for things like “water, electricity, gas, cable television, landscaping, internet and pool service.”

Rebecca states some of her bills are:

Rebecca has asked the court to force Robert to pay temporary child support and alimony, her attorney fees and let her have use of the platinum credit card again.

But Robert has refused to hand over his financial info to her, saying that he wants the case heard through arbitration and not the courts, and he’ll give his income information to the arbitrator when the time comes, according to court docs.

The injured Cleveland Browns player filed for divorce in Sept. 2016, citing that his three-year marriage was irretrievably broken, and there was no chance for a reconciliation. The pair has a toddler daughter, Reese Ann Griffin, together.

A judge has yet to rule on alimony or child support, but negotiations between the two went further downhill after Robert tried to force the case to go to an arbitrator instead of a judge, who would decide the matter outside of the courts. Rebecca, meanwhile, wanted to keep the case in the courts and asked the judge to step in.

Robert claimed that the exes signed a prenup that specified that they’d go through arbitration on any “claim or controversy arising out of the agreement.” But Rebecca’s lawyers argued that arbitration was improper, because of certain issues, like child custody and child support, weren’t in the prenup and cannot be arbitrated.

Rebecca’s lawyer questioned whether Robert recently stepping out with his new pregnant boo while still married was the reason why Robert wanted the case handled out of court.

“Perhaps Petitioner’s conduct as of late is the reason why he is trying to avoid a judge or jury hearing these issues. It is further evident that Petitioner is trying to bully Respondent like he did in the procurement of the Premarital Agreement so that she will not be able to exercise her right to a trial before the Court or a trial by jury on the significant issue of conservatorship of the child, among other issues in this case,” Rebecca’s lawyer wrote in a letter

The judge agreed to block the arbitration, and now Robert is now appealing.