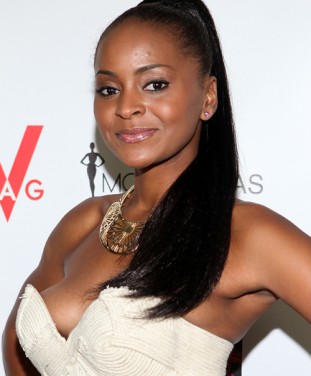 Royce Reed shares what she’s been up to since her days on Basketball Wives. VH1 decided to catch up with Royce Reed‘s presence, claiming they missed her presence on Basketball Wives. Which I’m not understanding that logic as they fired her, as the Shaunie and Evelyn didn’t want to tape any segments with her. She talks about her relationships with the cast, her personal life and what she is doing professionally.

What’s new with you professionally?
Fantashique is definitely thriving. We have ninety five members in the Orlando branch, and we have six companies and four competition teams. We also just expanded to Atlanta and have plans to expand to five cities in five years. And we’re trying to pitch a show for Fantashique, too. Other than that, I’m still working on my second book, I know I keep putting it off and people keep asking me about it, but I have so much going on that I don’t have time to write, and I don’t want a ghostwriter. I pride myself on writing my own stuff, but it’s coming sooner or later.

Fantashique has a strict code of conduct when it comes to the young girls who take dance lessons with you. You have grade expectations and social media rules for all your girls, which is impressive.
This generation is very, very scary. The stuff we go through with these girls is more real that saying “Oh, you’re talking about me?” [Being on the show], I felt like I was being a hypocrite, because I’m on a show where there’s like, constant fighting, and yet I’m sitting here trying to voice something different. As much as I enjoyed the checks, it wasn’t worth contradicting myself and doing something I didn’t really believe in. I felt kinda like I was selling my soul. I was totally fine with the way I went out last season, you saw me doing my career, you saw me being me.

What’s happening in your romantic life?
Dezmon and I are good. We went through some bad times and for the past year it was very on and off, really it was a lot of off. I learned from doing this show that relationships last longer when no one knows your business. With that said Dezmon and I are on good terms.

Who do you keep in touch with from Basketball Wives?
Kesha’s my girl, we still speak. And Tami and I are good again now, I reached out to her, obviously, after her mom passed, and I sent some stuff for the service. We kinda talked and I think she realizes where I was coming from, and I think she realizes I was being a true friend to her. I’ve always cared about Tami, I’m not gonna badmouth her, I will voice my opinion though. Jen and I, every blue moon, we’ll text, same thing with Kenya. I talk to Meeka very rarely. Gloria and I don’t have any beef. She actually reached out to me to get Evelyn’s contact information after Evelyn went through all her stuff, and I mean, Evelyn obviously is not my favorite person in the world. Neither is Shaunie. Outside of that, I’m just doing me.