We reported a few days ago that Brandon went to a BLM rally and started shouting, “aLl LiVeS MaTtErs”, from the safety of his car, a few protestors told him to shut up, but he wasn’t having that, so he retrieved a hunters bow and arrow from his car.

This man took out a hunters bow and arrow and started to shoot at protesters. Earlier in the protest he also brandished a machete threatening protesters.

He then went on local TV and told the reporter that two African American men attacked him. From this video you can clearly see, that it was about 99% of those getting their daily cardio were Caucasian protesters. (See below)

Well after various videos were posted, we even had people sending us video to debunk his lies, Salt Lake City Police Department are looking to arrest him.

And to add icing on the proverbial insane cake, here are two of Brandon’s many interesting Facebook posts. He is such a delightful specimen.

We’ll update once Brandon has been arrested. 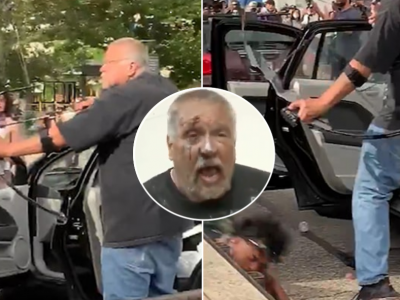