Boasting ‘unobstructed views’ of the Pacific Ocean, 14 bathrooms, 10 bedrooms and a 25ft infinity pool, this is the lavish Malibu hideaway that Beyoncé and her newborn twins currently call home.

Beyoncé is renting the $400,000-a-month mansion known as La Villa Contenta until the end of August and moved in on Wednesday after leaving hospital with her newborns, believed to be a boy and a girl.

On Sunday, her mother Tina Knowles Lawson, 63, was spotted arriving at the luxurious house to visit the twins – pulling up in a black Porsche SUV and wearing her trademark gold bracelets.

The grandmother-of-four was also reportedly present when the children were delivered on June 12 at Los Angeles’ UCLA Medical Center.

Her daughter and the new babies then spent just over a week at the hospital before being allowed to leave.

The day before, new father Jay-Z, 47, was pictured arriving to see his wife and children at the Westwood campus, shortly after enjoying a gym class in nearby West Hollywood.

Set on a bluff overlooking the sea, La Villa Contenta has extensive 6.3 acre grounds, which contain a rose garden with more than 1,000 flower bushes, a landscaped desert area and a tennis court complete with a viewing deck.

Other buildings on the estate, which is listed for sale at $54.5m, include a ‘natatorium’ – or pool house – ‘inspired by grand European follies’, a large office building and a staff housing complex.

According to the property listing, furnishings inside the main villa include a ‘museum-quality’ Chippendale mirror and 18th century chandeliers carved from amethyst and rock crystal.

Next to the front door is a 2,500-year-old lion’s head bust that was discovered at the base of Mount Vesuvius in Italy.

Beyoncé, 35, is understood to be renting the $400,000-a-month mansion until the end of August and moved in on Wednesday after leaving hospital with the babies, thought to be a boy and a girl.

The Crazy in Love singer has spent much of the last week holed up inside Los Angeles’ UCLA Hospital, where the children were reportedly delivered by caesarean section on June 12.

Husband Jay-Z, 47, was pictured arriving to visit the trio in hospital on Monday evening, descending on the Westwood campus with his entourage following a gym class in nearby West Hollywood.

He is also understood to have been caring for the couple’s five-year-old elder daughter Blue Ivy, who is also now in Malibu with her parents and siblings.

The couple had been living at an equally impressive $55m mansion in Los Angeles’ upmarket Holmby Hills neighborhood in the run-up to the birth.

When DailyMail.com visited the property this week, it appeared to be undergoing a renovation with workers seen entering and leaving the 2.6 acre grounds.

The house, which has five bedrooms and six bathrooms, once belonged to baseball mogul Frank McCourt, who owned the Los Angeles Dodgers until 2012 when he sold the team for $2bn.

In May 2014, the property was sold to a British billionaire, understood to be Ian Livingstone, 55; a property developer who, with his brother Richard, runs Cliveden House – a Palladian mansion that once belonged to Nancy Astor – in Buckinghamshire, UK.

Jay-Z and Beyoncé have been renting the house while searching for a Hollywood home of their own, having relocated to California from New York earlier this year.

Among the properties the couple have reportedly seen is a $200m mega-mansion that currently belongs to Petra Ecclestone, younger daughter of Formula 1 supremo Bernie.

Nicknamed ‘the Manor’, the lavish residence was built for the Spelling dynasty in 1988 and has 14 bedrooms, 27 bathrooms, and sits amid five acres of garden.

It is not known if the superstar couple plan to return to their Holmby Hills house, which is next door to the infamous Playboy Mansion, in September.

Neighbors at their current address, in the exclusive Malibu Colony enclave where average rentals start at $100,000 per month, include Halle Berry.

The actress, 50, has a house that sits directly on the sandy beach facing the Pacific just below Beyoncé and Jay-Z’s new bolthole.

Other nearby celebrities include Caitlyn Jenner, Barbra Streisand, Pamela Anderson and Julia Roberts, all of whom live approximately two miles further up the coast near Point Dume – close to the beach where the original BayWatch TV series was filmed.

But none can boast homes as ravishing as La Villa Contenta, which is owned by real estate mogul Richard Weintraub and has an impressive Hollywood pedigree.

Weintraub is thought to have attempted to sell the estate several times, slashing the asking price from $75m when it was first listed in December 2010 to $54.5m today.

The property, which is also listed on industry site Malibu Locations, has been featured in HBO’s True Blood, where it stood in for the mansion of Queen Sophie-Anne, the Vampire Queen of Louisiana.

It also appeared in CW series Privileged, which although set in Palm Beach, Florida, used the house for scenes set in the home of cosmetics mogul Laurel Limoges.

Movies filmed at the property include Funny People, a 2009 box office bomb featuring Adam Sandler, Seth Rogen and Eric Bana, and I Love You Man – a 2009 romcom starring Paul Rudd.

Despite the long list of box office turkeys filmed at the property, the house itself has a number of spectacular features, including a billiards room paneled in English pine and bamboo, and a solarium that seats 10.

Other features include a library with a marble fireplace, a media room with a 14ft screen and a ‘rustic kitchen ideally suited to a private chef’.

The house also boasts a dining room that can seat up to 24 people and comes with George III antique furniture and a limestone ceiling.

On the upper floor is a master suite with his and hers ensuite bathrooms, individual closets and a large terrace overlooking the Pacific.

Along with the 25ft infinity pool, the natatorium has an indoor bathing area of its own and a frieze over the doorway decorated with more than a million seashells.

The two changing rooms, named Venus for women and Neptune for men after the Roman deities of love and the sea, have onyx paneling and large lounge areas.

Attached is a ‘state-of-the-art’ Viking-design kitchen, each of which cost up to $10,000, and is described in the listing as having ‘everything a home cook or professional caterer could need’.

Outside is a greenhouse, said to be one of the largest in California, which contains several thousand rare species of orchid and a kitchen garden stocked with organic produce.

Close to the main property is the office complex which ‘could otherwise be used as a six-bedroom house’ and comes decorated with green Venetian marble walls and Baccarat crystal chandeliers.

And, should Beyoncé need somewhere for her mother Tina to stay when she visits, there is also a one bedroom guest suite decorated in ‘soothing’ neutral tones and hidden in ‘a grove of ferns and other lush plants’. 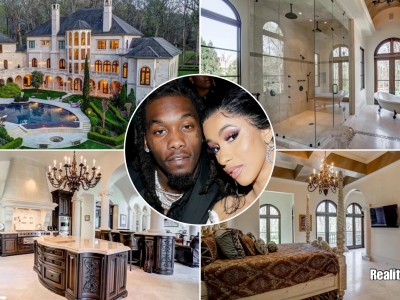 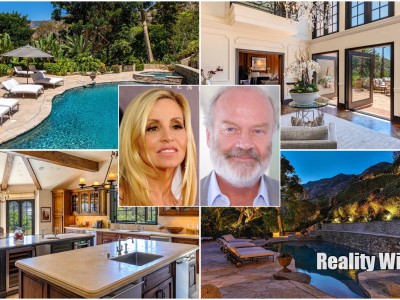