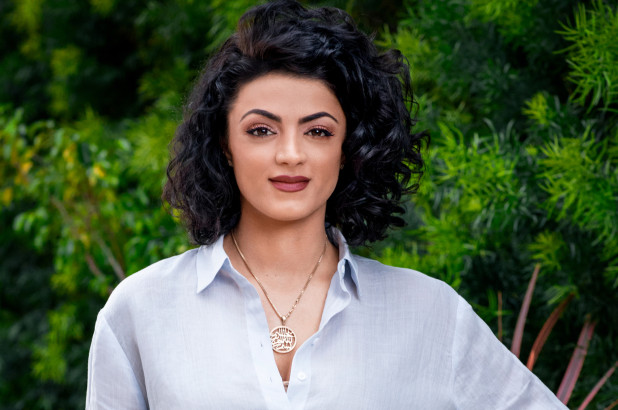 Shahs Of Sunset star, Golnesa ‘GG’ Gharachedaghi, 36, is pregnant with her first child.

People magazine had the exclusive.

“I just always knew I’d be a mom someday. I’m finally at this point where I’m ready to make this move. I can’t wait to give this child a life of unconditional love without judgment, the same way my mom has shown me my whole life. I just wish she could teach me how to cook! I still haven’t figured that out yet … “

GG, lives in Los Angeles, is currently single and plans to raise her child on her own. She used a sperm donor, and successfully completed a round of in vitro fertilization in August.

On deciding to use a donor:
”I heard about a really good donor concierge company, who scavenges through the data from all the sperm banks in the nation and some neighboring countries to find you what you’re looking for. It’s amazing how the process really works. The profiles are about 47 to 50 pages each, and they’re filled with all this amazing information, like genetic background for the man and his entire family. I hate to joke about it, but you know the Build-A-Bear Workshop? It’s almost like that, but it’s a human. Build-A-Baby!”

GG’s journey to become a mother was difficult as she nearly died after her first successful IVF transfer in the spring led to an ectopic pregnancy that required emergency surgery and the removal of both Fallopian tubes.

She recalls, “What I went through a couple of months ago is so traumatizing. Right now, it’s still very scary for me.”

GG details what happened after the first successful embryo:
”I would have a bit of a cramp here and there, and I started spotting a bit. I would freak out and say, ‘Something doesn’t feel right to me,’ and my doctors would calm me down, like, ‘It’s normal. Your uterus is making space for the baby. Lots of pregnant women have spotting. You’ve never been pregnant before, this happens.’”

At the five-week mark, during her first ultrasound, doctors couldn’t find the gestational sac. Experts were called in and eventually, it was found in her left Fallopian tube — a rare experience with IVF, seeing as the procedure is meant to bypass the Fallopian tubes.

“It was an ectopic pregnancy. The only option was to terminate it — in my case, through the distribution of a very strong drug called methotrexate. That was probably the most traumatizing moment of my life. Literally, just a couple of days before, I was celebrating. And now, I was mourning.”

At a follow-up appointment three days later, GG learned the methotrexate hadn’t dissolved the sac. Two additional rounds of the powerful medication were given over the course of the next six days, until GG who was doubled over in pain by that point ended up in emergency surgery at Cedars-Sinai Medical Center, where both of her Fallopian tubes were removed.

The removal of her Fallopian tubes meant that now the only way she could get pregnant was through IVF.

After going through all of this, GG was left feeling understandably angry, depressed and lost.

”For weeks, I was playing the, ‘Who am I supposed to be mad at?’ game. I wanted to blame someone and I couldn’t. I kept blaming myself because no one had an answer. I checked back into therapy, to try to figure out how to work through this all.”

Eventually, GG decided to try again, “I knew if I sat around being sad and isolated, it wouldn’t be healthy. I had to try it again.”

Her second IVF transfer round was on the 29th August.

”You think this is supposed to be such an exciting time, but this second time around, I was sort of numb. When I went in for the first ultrasound, I couldn’t breathe. I had anxiety for two days. I couldn’t sleep, thinking, ‘This is going to happen again’. Sure enough, I had the ultrasound, and we saw [the embryo]. A week later, we saw the heart vessel pumping. So I’ve slowly been feeling more and more relaxed about it.”

GG has a strong support system around her, especially in her “amazing” parents.

She says, “My mom is such a soldier for me. She’s literally my punching bag. These hormones are no f–ing joke. I have to inject myself every morning in the butt with just pure hormones and I just rage. I cry for random reasons. And my mom’s just been there for it all.”

GG on being a single mother:
“I’m okay right now focusing on me and my baby. We’re in a day and age that women are so much more independent, and we’re not necessarily relying on men in order to move forward in life. I can start a family and have my child without being in a relationship right now. If I’m lucky to meet someone who I vibe with and it works, that’s great, but I’m not interested in getting married in the future and don’t necessarily see myself with a forever life partner. My forever will be my child.”

GG says she’s keeping the sex of the baby a secret for now:
”My life is such an open book, I kind of want to keep one thing a little close. But knowing me, I’ll blurt it out at one point.”

More in Reality Television, Shahs Of Sunset (96 of 2154 articles)