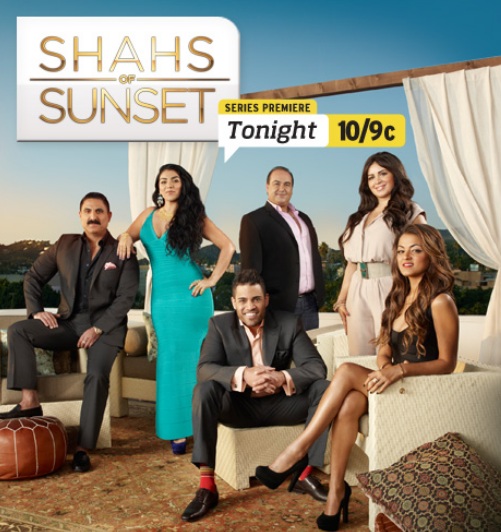 Image Is Everything
The Shahs start off by telling us they fled their countries, during the start of the revolution in Iran. I’ve been a refugee since I’ve been 8. At one point do you stop being a refugee? I think once you make your first million! They are all rich, cute and did I mention rich. They all landed in Beverly Hills, California, as most refugees do, and attended Beverly Hills High school, BHHS alumni includes Angelina Jolie, Nicolas cage, Lenny Kravitz; yes that one, West Beverly Hills School from 90210 is based on BHHS.

MJ has two dogs Julio and Pablo, she doesn’t want marriage or children. Most persian families are big on settling down, marriage and children, so her not wanting that life is a shocker, not. Her animals have their own Facebook pages, take that Jiggy. Julio and Pablo also take yoga classes and are registered voters. She dropps them off at a doggy daycare center and their bedroom was nicer than mine! MJ’s mom Vida, and Sammy visit MJ for lunch. Vida immediately attacks MJ’s attire stating she looks like a peasant girl from the village. Gotta love mommy.

Vida is giving Elsa Patton (RHOM) a run for her money, Vida’s pearls of wisdom:

I raid my closet immediately and throw away my flip-flops, why because Vida says so! Even though I live in Florida.

MJ’s friend Jenn is getting married and she has the dubious privilege of being the maid of honor. They go dress shopping and MJ feels short of breath, marriage brings this out in her. Jenn wants MJ to try on a bridesmaid dress, MJ is reluctant. MJ protests too much about not wanting to get married, once the right man comes along trust me she will change her tune. Quotes to live by, MJ spends more on her handbag than her rent as more people see her handbag that the place where she lives.

GG doesn’t like ants or ugly people (hilarious), but she like cars, guns and knives. She had a nose job, although she was cute before the cosmetic procedure. At 30, she is still daddy’s little girl, daddy pays all her bills and does her bookkeeping, awesome. I wouldn’t mind my dad paying all my bills.

Mike used to date GG’s sister Laila, which could be awkward if they do get together (I predict that happening) and he works in commercial real estate. He of course is a ladies man. He goes to his parents every Shabbat to bring on the Sabbath. I like Mike.

Reza is the token gay. He is fabulous. He loves himself and is very, very humble. I cannot wait for Saturday Night Live to parody him, it will be epic! MJ and Reza are bff’s they both work in realty.

Asa is a singer, painter, photographer, an artist and a free spirit. Asa is the hippy, new age diva of the group. She left Iran as a child during the
revolution and moved to the ghetto of Beverly Hills, where on earth is that? Beverly Hills has a ghetto? She is recording a song with Mister Bunny. I’m supposed to take him seriously? Mister Bunny.

Sammy is a real estate developer, he is the cuddly, loveable character from the crew.

The gang goes out for drinks and Reza thanks his lucky stars that Asa did not dress up like a belly dancer. Then the obligatory conversation about marriage, dating and religion starts, as we need to know what the Persians think about race and religion. It’s reminiscent of a show where the Black father asks his young daughter what color she is and she responds, brown. No I’m not kidding, that really did happen. Yeah, yeah, yeah we know you date outside of your culture and belief system, where would the reality and drama be in that if you didn’t?

Sammy on Reza: He’s the only guy that has a rapist moustache and is still cool

Reza makes a joke about a kabobi, a fast food kabob restaurant, which is obviously de classe and Asa mentioned H&M a clothing store, while looking at GG. GG obviously takes offense to this as she is wearing DVF and louboutins and wouldn’t be caught dead in H&M. So, GG shopping at Ross, Marshall or TJ Maxx would be out of the question right? I’ve never shopped H&M is it the payless of clothing stores? Apparently wearing H&M is the kiss of death to a fashion maven. Asa was implying or may be not, that GG is broke. But how could she be if daddy is footing the bill. I am sure more drama will unfold later this season, between them. GG calls her ghetto and Asa responds, ‘what’s ghetto? Because my daddy doesn’t bank roll my life?’ Speaking about family members is off limits and GG is pissed. Flip a table GG! Just kidding.

Mike, started his real estate venture in Las Vegas, made millions and lost millions soon after. He moved back to LA and doesn’t seem to be doing to bad. Mike’s mom calls while in a business meeting? Really? Mike had to be reminded about Shabbat dinner.

Sammy is throwing a pool party at his house, complete with a tiger.

Reza prepares for the pool party in front on his client and friend Tony. He showers and he advertises his singleness by showing us his untanned butt. GG arrives at MJ’s and they get ready for the party.

Here pishi, pishi, pishi.. (pishi = kitty) Reza falls in love with the tiger. Reza tigers are far from being kitties!

Mike brings his date, Lana a latina, who is hot. Reza says she looks like a mail-order russian prostitute. Ouch! GG get’s hot and bothered that Lana is dressed the way she is. Isn’t this a pool party, why are you upset.You protest too much. You want Mike, admit it.

Asa is a broke down Punky Brewster.

Reza is throwing his birthday party in Las Vegas, he admits to inviting Asa. GG is not pleased, I can’t wait for that episode.

Bravo you need to announce Shahs of Sunset as the first ever reality show to be renewed for at least 3 more seasons, after 1 episode!

I give Shahs of Sunset 3 ½ stars

Next week: It’s My Birthday B*tches
Reza celebrates his birthday with an overblown party in Las Vegas, but GG and MJ let the gossip fly, causing fire tantrums and jeopardizing Reza’s birthday weekend.