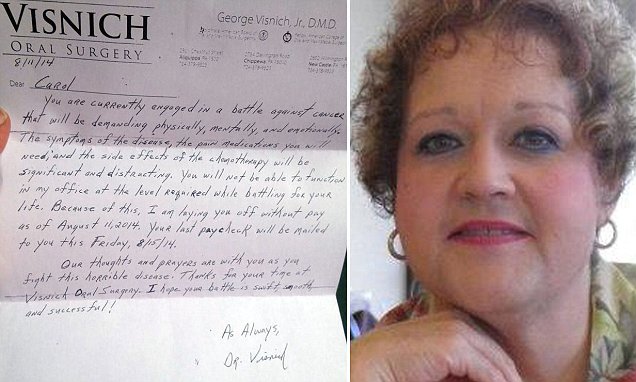 via BEAVER COUNTIAN:
People across the county have begun to rally in support of a woman recently diagnosed with cancer after the doctor she worked for apparently sent her a callously crafted letter laying her off because of the diagnosis.

Hopewell Township resident Carol Jumper was diagnosed with cancer last month that is affecting her ovaries, liver, and pancreas.

“She just couldn’t sleep at night, she would get out of bed and sit in a chair in the living room, that’s the only way she could sleep was sitting up” said Dennis Smerigan, the woman’s fiancé. “It went on for 2 or 3 weeks, you don’t really think anything of it at first. I was cleaning out the bed of my truck one day and she came out, she said you got to take me to the emergency room.”

Jumper underwent testing and biopsies that confirmed a diagnosis of cancer.

“It was about a week later she gets this registered letter delivered at the house,” said Smerigan. “I was pissed when I read that letter. No kind of man sends a letter like that.”

The handwritten letter attributed to Dr. George Visnich Jr., an oral surgeon with offices in Aliquippa, Chippewa, and New Castle, told the woman she was being laid off from work.

“The symptoms of the disease, the pain medications you will need and the side effects of the chemotherapy will be significant and distracting,” read the letter in part. “You will not be able to function in my office at the level required while battling for your life. Because of this, I am laying you off without pay as of August 11, 2014. Your last paycheck will be mailed to you this Friday, 8/15/14.”

Carol’s sister Joyce made photocopies of the letter and began handing it out to people. Her friend Rose Lerini published a picture she took of the letter to Facebook where it went viral.

“She had been working full-time for this man for over 12 years,” said Smerigan. “He didn’t even call her, he hasn’t even called her once since she got sick.”

The Beaver Countian was unable to reach Dr. Visnich to discuss Carol Jumper or the letter. “Dr. Visnich is unavailable today, he is in surgery all day,” said a woman who answered the phone at his office. She declined to discuss Jumper or take a message seeking comment from the doctor before hanging up the phone.

A copy of the Dr. Visnich letter also found its way to the Celtic-Reds Athletic Club in Aliquippa, where it now hangs prominently on a wall.

“I couldn’t believe that a man could do that after 12 and half years of service,” said John Barkovich, a member of the club who is helping to organize fundraisers for Jumper. Barkovich lost his son to a car accident several years ago and has since helped to raise money for worthy causes like Jumper’s.

Barkovich told the Beaver Countian the Dr. Visnich letter rallied members of their club into action.

A Facebook group called “Bumpers Buddies” was established by Jumper’s friends to help rally the community in her support — it already has nearly 300 members. They are also selling Tshirts at “Lloyds The Running Store” in Beaver to help raise money for the woman.

Although Carol Jumper worked full-time for Dr. Visnich, her fiancé said she did not have employer provided healthcare — the woman was able to get insurance on her own through an Affordable Care Act (Obamacare) health plan.

“She has no income coming in at all, I am trying to bust my butt for her,” said Smerigan. “A lot of people have been very helpful, it’s unreal.”

John Barkovich is hoping a spaghetti dinner and a golf outing will raise much needed funds to help with the couple’s practicalities and out-of-pocket expenses, and also to help them get married.

“We were engaged before her diagnosis and we had a date set next year for our wedding,” Dennis Smerigan told the Beaver Countian. “If she starts getting really sick then it is going to happen sooner… it might have to happen a lot sooner. I am going to marry her.”