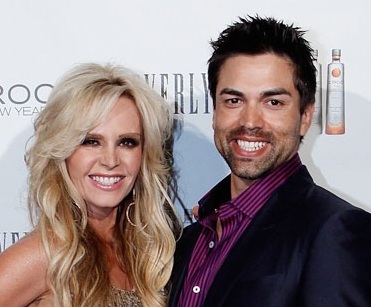 According to Life & Style, the Real Housewives of Orange County star Tamra Barney is engaged to Eddie Judge. They are allegedly keeping the news under “wraps” until they film the reunion show soon. No one at Bravo can keep a secret. Ever.

Tamra and Eddie have been dating for two years.

Tamra was first married to Darren Vieth they have a son Ryan Vieth
Tamra was married to second husband Simon Barney for 11 years, they have 3 children.

No wedding date has been announced.

“I’m done being a trophy wife; Freedom only makes me hotter.” (Season 6)

“I call the shots in my life now, and I have good aim.” Current

Simon and Tamra’s best man at their wedding, was Simon’s long time friend Glamour Photographer Jessie Eastland aka Robert DeMeo. When the Bravo Network asked the Barneys to join ‘Housewives’, Simon called his friend and Best Man and asked him his opinion on whether or not they should do the Reality Show. Mr. Eastland’s reply was: “If you want to be divorced from Tamra, bust up your family, wash your dirty laundry in public and make your life miserable for the next few years…do the Show”. Never a truer word has been said. If you want the marriage to last Tamra, let this season be your last. Take a hint from Lauri Peterson.

Simon and Tamra’s divorce was final as of October 2011. Tamra Barney’s divorce settlement with her second husband, Simon Barney, reveals that neither one will pay child or spousal support and that they must be civil to each other. It’s a shame that you have to be court ordered to be civil to the mother/father of your children.

More in Real Housewives Of Orange County (272 of 362 articles)