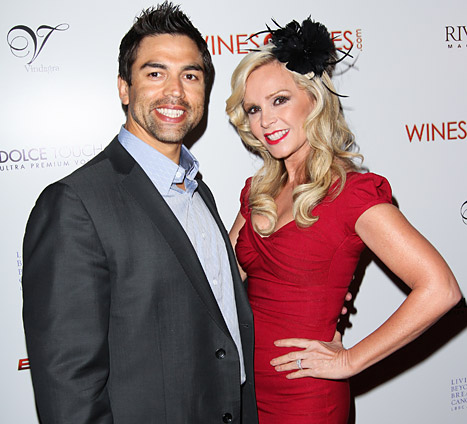 via US Weekly:
If things go according to plan, Tamra Barney will walk down the aisle twice — with the same man, of course.

The Real Housewives of Orange County star, who told Us Weekly exclusively about love Eddie Judge’s February proposal in March, is “thinking about having two weddings,” she said at the Wines By Wives launch party in Hollywood Tuesday. “We’re thinking about maybe going to Mexico with the kids and [our parents]. . .and then coming home and having a big fabulous wedding for hundreds of people.”

According to twice-divorced Barney, 44, she’d prefer not to film “the private one with the family and kids.” For the second, however, “we’d do a big one for all our friends, because it’s so hard to get people to travel. And, of course, the cameras want to be there!”

Barney is dreaming big, too. “I want Stevie Nicks to sing at my wedding! That’s what I want!” she laughed, realizing that the chances of that actually happening “are zip!”

Whatever they decide, Barney and Judge, 39, are certain they doesn’t want an “over-the-top, extravagant wedding where you kind of lose all concept of what you’re doing there,” Barney said. “Me and Eddie are very simple people and we don’t need all the frills and fancy, so I’m hoping it’s going to stay small and intimate with a lot of love. That’s all I want, a lot of love.”

More in Real Housewives Of Orange County (228 of 362 articles)