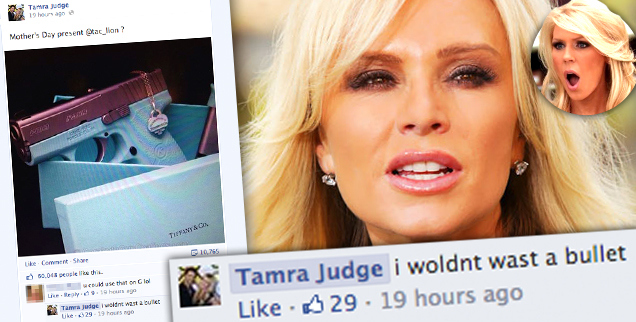 via Radar Online:
Tamra Barney’s feud with Gretchen Rossi took a dark and dangerous turn this week when Barney posted a picture of a gun and made a callous comment about not wasting a “bullet” on her former co-star.

Only Radar Online.com has all the details about the “sick” post that has fans slamming Barney for advocating “violence.”

The Real Housewives of Orange County stars have been feuding off-screen in recent weeks due to Rossi’s unsolicited comments on Barney’s bitter custody battle with her ex-husband, Simon Barney, 50.

And on Thursday, Barney took things up a notch by posting a Facebook picture of a two-toned 9mm gun painted Tiffany & Co. blue.

The first comment on the post was a snarky dig at her former RHOC co-star, saying, “u could use that on G lol,” presumably referring to Rossi. Barney replied, “i woldnt wast [sic]a bullet.”

The backlash was swift against Barney, with one commenter writing, ”Wow, thats horrible Tamra. First you advertise a gun then you engage a comment regarding shooting someone and respond with I wouldnt waste a bullet. Nice…real nice. No wonder I stopped watching the show. Nice to see you advocate violence.”

Another follower weighed in saying, “Yes I agree…..find it sick really. All need to grow up. I hate guns reminds me of all the innocent kids and women slaughtered each day across the world and here you are bragging about them. Sitting here shaking my head. Awful.”

The gun is reportedly NOT made by the respected jewelry company but by Kilo guns, whom Tiffany & Co. have asked to stop using their patented blue color.

When Barney was informed that she couldn’t buy the firearm at the same place she could buy a silver keychain she clearly was disappointed.

“Oh well its not real…I still want it,” she wrote.

More in Real Housewives Of Orange County (183 of 364 articles)