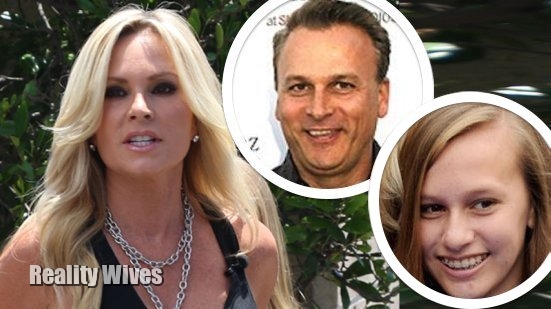 via Radar Online:
Tamra Judge is lashing out at her ex, Simon Barney, now that a court has determined that “it is not in the best interest” for their daughter Sydney to attend counseling sessions with her.

“Sidney’s court therapist testified that Sidney is suffering from parental alienation and referred to Simon as the ‘gatekeeper,’” Tamra tells Radar Online.com in an exclusive interview.

“I’ve tried everything to get my daughter help…Simon fought so hard to get Sydney out of therapy and he went as far as to drag his daughter into a courtroom to testify how she doesn’t want any more therapy.”

As Radar reported, according to court documents, the judge found that Sydney, who has been living with her father full-time since October 2013, was “extraordinary [sic] reluctant to see and have a relationship with her mother.”

Though the court initially ordered 16-year-old Sidney and her mom to attend therapy together, the teen’s adamant refusal swayed the judge to rescind the demand.

“Because Sidney is almost 17 she was able to choose who she wants to live with and told the judge she will refuse to go to therapy even if he orders it,” reveals Tamra. “The judge granted her wish. I’m devastated and worried about Sidney’s future under her father’s control.”

Despite Tamra’s concerns, the court found that Simon is “not involved in any alienating conduct in this case.”

Tamra Judge’s Daughter Sidney Begs, Judge Not To Force Her To Spend Time With Her Mother

More in Real Housewives Of Orange County (121 of 364 articles)

Tamra Judge’s Daughter Sidney Begs, Judge Not To Force Her To Spend Time With Her Mother