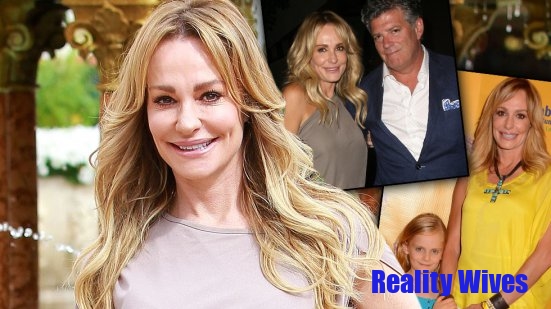 via Radar Online:
It’s been almost four years since Taylor Armstrong’s ex-husband Russell Armstrong committed suicide, and The Real Housewives of Beverly Hills star is finally putting distance between her past life and her new, happy one. The reality blonde opened up to RadarOnline.com about how she’s moving on in an intimate and revealing new interview.

“I feel at peace,” Armstrong tells Radar exclusively. “When we go through something tragic or frightening, I believe that you find a strength inside of yourself that you didn’t know that you had.”

Armstrong, who survived domestic abuse in her first marriage, is now getting ready to celebrate her one-year anniversary with her new husband, John Bluher, on April 4.

“John and I are best friends,” Armstrong says. “He’s the person I could spend every minute with and never get tired or never feel like I need some alone time.”

Her new family unit has also provided a stable life for her 9-year-old daughter, Kennedy.

“John and Kennedy have a really beautiful relationship,” Armstrong says. “Now, Kennedy gets to see a mutually respectful relationship where John cherishes and respects me and vice versa. I feel like I’m getting a chance through my marriage with John to hopefully repair some of the damage that could have been done.”

But despite the turmoil in their past life, Armstrong still does try to keep a communication open with Kennedy about her father.

“I was advised by a child psychologist to bring him up on occasion and not to give her the impression that people just disappear in the world and then you never speak about them again,” Armstrong explains. “We try to keep that dialogue going whenever there is an open door just to kind of check in and make sure that she’s doing okay.”

As for her former life in Beverly Hills, Armstrong has found a new world in her home of Vail.

“When I left LA, things were still pretty chaotic for me and I was much more anxious and frazzled from that experience,” she says. “I’ve been able to really sit back and reflect on my experience because it’s quiet here and I get that time to like breathe.”

Armstrong now uses what she learned through the experience to help other people.

“I do public speaking around the country to explain the cycle of abuse and what it’s like to be in that,” she says. “It really gives me time to reflect on everything that I’ve been through and to try to come to terms with why I would have allowed that to happen in my life and how that cycle started and how the progression occurred. And as I visit shelters and speak around the country, it has allowed me to relate more with other survivors or people that may be trying to get out of a dangerous situation.”

“I’m hoping that in my lifetime I can make an impact and that some day Kennedy can look back and see I made a difference and did the best with the situation that I went through,” she says.

Kyle Richards: “I Wimped Out At Dinner In Amsterdam”

More in Real Housewives Of Beverly Hills (296 of 790 articles)