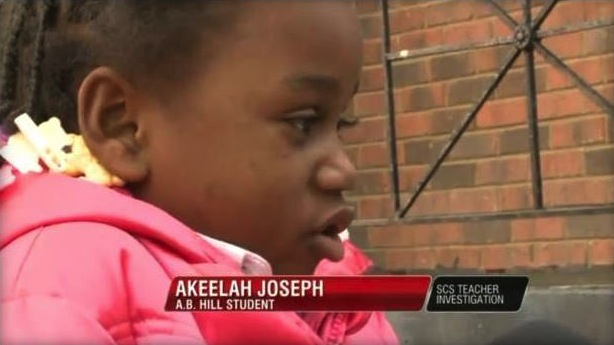 via WREG:
The Shelby County School district is speaking out for the first time about accusations that a teacher locked a 5-year-old in a closet for over an hour. The kindergartener was found only after the teacher went home and a sub came in. A.B. Hill Kindergarten teacher Kristin Oshfeldt is suspended with pay while the Shelby County School district investigates some pretty horrifying accusations against her.

“I almost peed on myself because I couldn’t make it to the bathroom,” said Joseph.

Akeelah’s mother says she was found in that closet by a substitute teacher after Oshfeldt went home sick. Students say this wasn’t the first time something like this has happened. Branelle McGaughy’s kindergarten son is one of them.

“You shouldn’t have to worry about this. You send your kids to school to learn. Not to be put in closets and hit over the head with rulers and stuff like that,” said McGaughy.

The school district’s website shows as of two years ago Oshfeldt was a school leader over student discipline. WREG asked SCS about the incident and it would only say the actions Oshfeldt are accused of are not a part of its discipline policy. The district’s policy actually bans physical punishment of any kind, and that includes locking someone in a closet. Not only is SCS investigating the accusations, but so are Memphis police and the Department of Children’s Services.

Akeelah’s mother Wanda isn’t waiting for that investigation to wrap up. She wants answers now, claiming her daughter was terrified and freezing in that closet, and now she wants the teacher fired.

“You don’t do a child like that. If you’re going to punish a child you tell them to stop and behave or you’re going to write them up and send them to office. You don’t put a child in a closet period,” said Wanda Joseph.

News Channel 3 spoke with other parents who claim A.B. Hill is a good school and the actions of one person shouldn’t cast a negative shadow over everyone.