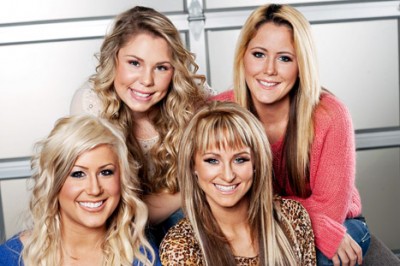 The Teen Mom ladies are back and this season they are bringing tons of drama! Starting the episode off is Jenelle who reveals that after leaving Keiffer and ditching her heroin addiction, she married Courtland Rogers on a “whim.” She explains that the pair began doing heroin and marijuana together and she had relapsed. She says that after they were arrested and went to prison after a physical altercation where cops ended up finding marijuana and heroin in their home, Jenelle realized she needed to get clean. She says she is very upset that she “didn’t think Courtland through” and wishes she had given herself more time to think. She shares that Courtland is currently still incarcerated and that she just found out she is pregnant with his baby.

After a lot of thought, Jenelle has decided to get an abortion. She says that she doesn’t even have full custody of Jace (her mother Barbara does) and she doesn’t want to have a baby with Courtland. Barbara agrees to pay for Jenelle’s abortion and to travel and take her for the abortion but requests that Jenelle goes on birth control immediately afterwards. Barbara questions why Jenelle wasn’t on birth control in the first place after having a four-year-old son, and Jenelle says she “didn’t have the money.” When Barbara calls her out on her lie, Jenelle says that it was because of her heroin addiction. Jace on the other hand is an adorable little boy but he has a mouth that needs a seriously cleaning out. He repeatedly says “f***” to Jenelle and Barbara and doesn’t stop when he’s asked to. Jenelle eventually threatens putting soap into his mouth and blames Barbara for her son’s terrible mouth.

When it comes time to leave for her abortion, Jenelle’s mother drives and pays multiple hundreds of dollars for the procedure. But when they arrive home Jenelle quickly morphs back into her miserable, screaming self. She lies on the couch, ignores Jace, and texts on her phone while Barbara attempts to show her Jace’s school picture. Jenelle tells her mom that it’s necessary for her to scream at her because she is a “b****.” The scene ends with Barbara in tears.

Kailyn is pregnant with her husband Javi’s baby but since Javi is enlisted in the Air Force and is currently stationed two hours away from Kailyn’s Pennsylvania home, it is putting tension on their relationship. Kailyn has requested that Jo allow her to move with Isaac to be closer to Javi. She says that since it is within a three hour radius it should be okay. Jo (Isaac’s dad) tells Kailyn that while it is more convenient for her, he is going to fight it because he doesn’t want to be that far away from his only son. After dropping Isaac at Jo’s house, Kailyn heads home and gets ready for her baby shower. When her friend questions what will happen if the judge sides with Jo and won’t allow her to move, Kailyn says that she and Javi would have to live four days of the week apart from one another. Kailyn has decided to be surprised on her baby’s gender so her baby shower theme is gender neutral. She is moved to tears when Javi gives a speech about how blessed he is and how much he loves and appreciates Kailyn and Isaac. Kailyn admits that she never pictured herself as having two babies with different fathers but she is extremely excited and happy to be sharing the day with her future husband.

Last season Leah and Jeremy got married and had a baby girl Adalynn. Because one of Leah’s twins from her relationship with Corey was recently diagnosed with an extremely rare form of muscular dystrophy, she is set on co-parenting with Corey and his wife Miranda. She wants to make sure that both of her girls are happy and know that they have loving parents. It’s great to see Corey, Miranda, Leah, and Jeremy all get along, figure out decisions together, and joke around. They have one of the best relationships on the show. Miranda is a new character this season and she is beautiful. She also admits that getting married at 23-years-old and jumping into the role of step mother wasn’t what she had planned with her life but she is mature and accepts it with open arms.

After taking a month off of beauty school last season, Chelsea reveals that she never went back and has decided to go to aesthetician school instead with a friend. Her father, Randy supports her in this quest and says that as long as she is going to school for something she loves he is happy. Chelsea also reveals that she and Adam are completely over with their on-again off-again relationship, but that Adam has a new girlfriend named Taylor who is pregnant. She is upset that Aubree is going to have a half sister and isn’t sure how to explain the situation to her daughter. Her father suggests she tell Aubree before Adam does she can choose her wording and says to explain that she is having a sister who won’t live with her. Adam has just been released from prison after receiving his third DUI charge. He agrees to meet with Chelsea at a restaurant to talk about visitation but when he arrives things go south immediately. Adam is his normal self; won’t look Chelsea in the eye, puts her down, and refuses to acknowledge the fact that he rarely visits his daughter. Chelsea raises valid arguments that she is scared he will forget about Aubree when Taylor gives birth. Adam says that Chelsea can’t keep Aubree from him (which she doesn’t) and that he is going to take her to court for scheduled visitation.

The previews for the season show Jenelle revealing a new boyfriend who she decides to actively try having a baby with, Jeremy threatening divorce, and Kailyn’s wedding day. MTV definitely brought it this season! What are your thoughts? Post your comments below.

Jenelle Evans’ Fighting With Boyfriend; She Hates Her Life

Jenelle Evans’ Fighting With Boyfriend; She Hates Her Life