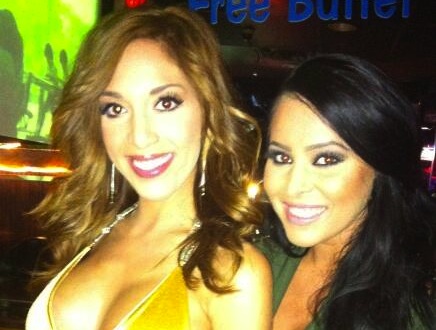 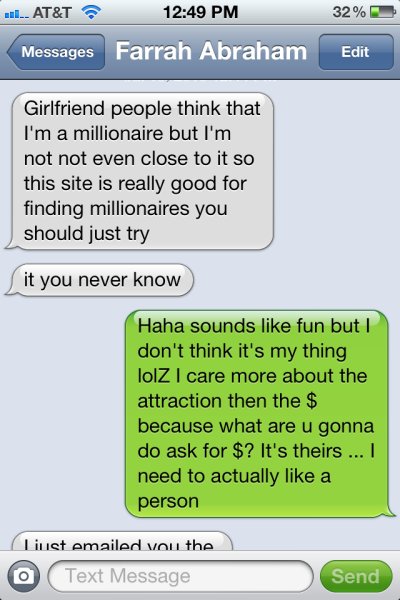 “Farrah told me she me this guy on a sugar daddy website and that she flys out to spend time with him for a fee,” Farrah’s ex best friend, Myla Sinanaj says. Myla is also Kris Humphrie’s ex girlfriend. These “sugar daddies” pay for vacations, shopping expenses, and even pay your bills.

Farrah and Myla became friends as the two shared a manager. But it wasn’t long before Farrah according to Myla was trying to get her to join the site. Myla claims she wouldn’t even consider it because she doesn’t want to be a gold digger and says she cares more about the attraction than the money.

When asked about her use of a ‘sugar daddy’ site, Farrah initially told Radar Online via email, it was a scam being engineered by an “obsessed” fan.

“As you know there are tons of fakes and scams out there and I can’t control my obsessed fans. The texts [with Myla] were made up texts to cause drama. Thank you For notifying me of lies and scams by both of these women [Myla and her manager] as they will be reported. For the record I am a millionaire, secondly I never optioned that the Fatima or ‘Myla’’… ever be apart of those things and I have no idea why they are sending made up texts to cause drama. I no longer speak to them… I have a real life with real people in it.”