Teenager Gang-Raped, Then Has Eyes Gouged Out By Her Own Sister In Brutal Exorcism Ordered By ‘Pastor’ In Argentina

via Daily Mail:
A teenager was brutally gang-raped then had her eyes gouged out by her sister in a brutal exorcism ritual that the rapists claim was ordered by a local pastor.

The victim, aged just 16, is now fighting for her life in hospital after the horrific ordeal, which her family said they orchestrated because they believed she was possessed by the devil.

After the terrible ordeal, the teenager was pinned down and her elder sister cut both of her eyes out.

The victim’s sister claimed that the religious centre even gave her the sharp knife used in the attack and said that she must personally carry out the brutal act in order to cure her.

The horrific attack happened in the town of General Pinedo, in the north Argentine province of Chaco and police have arrested the older sister.

She told police that her sibling was having visions and it was believed that because demons are terrified of pain, the act would drive out the demon.

Doctors reported that the victim had also suffered several injuries in the genital area and It is understood that police are about to arrest a group of men who took part in the twisted ritual.

The victim was in the intensive care unit of the Perrando de Resistencia hospital where she was transferred to be treated for her terrible injuries.

Police Commissioner Pablo Almiron said that the girl’s parents also believed she was possessed by the devil.

They told police she kept seeing animals like goats that were not there, and they had asked the evangelic centre and its pastor to help them ‘cure her’.

He said: ‘It is the first time in 22 years of my career in the police to have an event of this nature.

‘The prosecutor has also said that it is the first time in his life. It is very difficult to explain that something like this could happen to a teenager.’ 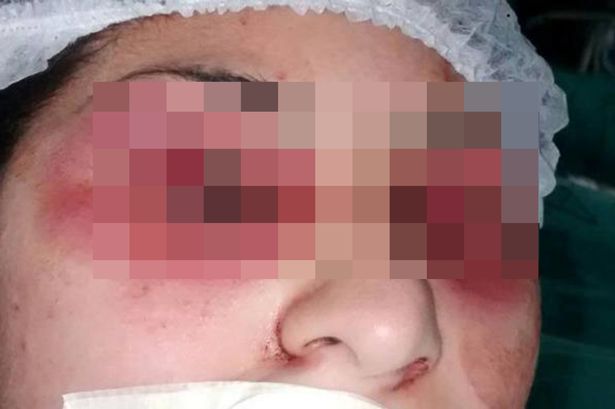 When on earth is rape or sex used during an exorcism? Or a brutal attack?

Sister Of The Groom Passes Out When Judge Says: “You May Kiss The Bride”

Sister Of The Groom Passes Out When Judge Says: “You May Kiss The Bride”