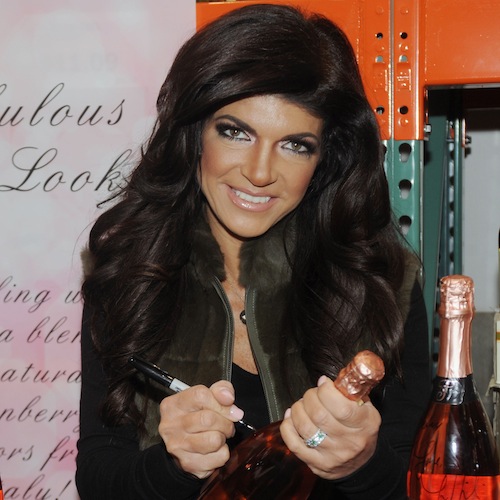 via InTouch:
Real Housewives of New Jersey star Teresa Giudice could be facing serious prison time, but insiders tell In Touch that the resourceful entrepreneur has already found a silver lining in her crisis.

“Teresa thinks that if she goes to jail, it’ll only make her more famous,” an insider close to the couple tells In Touch. “She thinks she’ll be redeemed and then become even more popular and be able to make a fortune.”

Teresa already uses her legal woes to her advantage. Sources confirm that RHONJ cameras have been following her family’s every move in the days leading up to her court date. A production insider tells In Touch, “She knows she has to let them film in order to be the star and central story line of the show. This is her moment.”

Four months after she and husband Joe were indicted on 41 counts of fraud, the couple pleaded guilty to nine felony charges, admitting that they were engaged in a nearly decade-long scheme to defraud banks, the IRS and bankruptcy court of millions.

“I’m not slamming Joe, but I truly still stand firm that Teresa was having babies and going for lunch and having fun [and didn’t know] what she was signing,” her RHONJ co-star Kim DePaola, now a life coach with the Budd Larner law firm, tells In Touch.