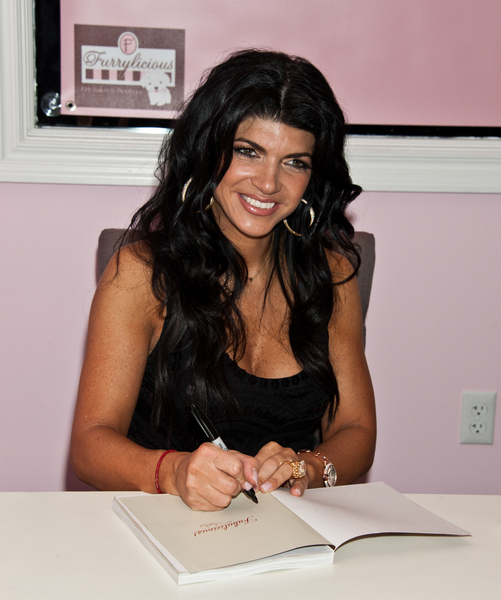 On Wednesday, March 19th Teresa Giudice held a book signing for fans The Porsche Spring Soiree in Garfield, New Jersey and the reality star was caught on camera selling fans “cash only” books. The event was hosted by Teresa’s friend Kim Depaola who appears on multiple episodes of the hit Bravo show. Tickets for the event were advertised as costing $110 which included dinner, wine, music and a fashion show but made no mention of having to purchase Teresa’s books or paying for autographs. A guest at the event revealed: 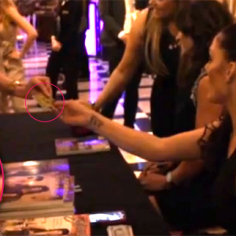 “Teresa was advertised as the the celebrity guest and that she would be signing copies of her latest book. But nowhere was it advertised that she would be charging guests $25 to sign and take a photo with her! When you walked up to her, the woman next to her was quick to advise that it was $25 and ‘cash only.’ Cash only? Who takes cash only? Even Teresa was telling guests it was ‘cash only, no receipts’ and she had bags of cash beside her where her colleague was collecting the money.”

While guests didn’t mind having to pay for the book, they were shocked when their credit cards were turned down and they were told “cash only.” An eyewitness reveals:

“The reaction of everyone was priceless. It was the hot topic of the event. Why would someone insist on cash only? Everyone was saying it was clearly to avoid a paper trial of her sales. Some of Teresa’s friends were saying that the U.S. Government is likely to be garnishing her wages now that they’ve accepted plea deals.”

Teresa and her husband, Giuseppe “Joe” Giudice were charged with 41 counts of fraud and tax evasion in 2013 and after pleading guilty and ultimately taking a plea deal, both face large fines and prison time. Teresa now faces 27 months in prison, while husband Joe could get 46 months and is facing being deported back to Italy. Prosecutors allege that Joe failed to file tax returns from 2004-2008 as well as the couple had submitted false W-2’s, mortgage papers, and income information. They also alleged the Giudices received about $4.6 million in mortgages, withdrawals from home equity lines of credit and construction loans.

Do you think Teresa was accepting cash only to hide her income? What are your thoughts? Post your comments below.