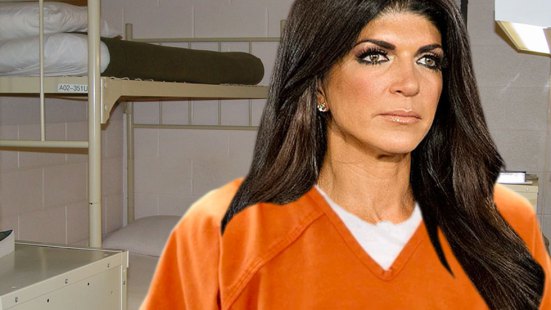 Real Housewives Of New Jersey star Teresa Giudice has allegedly been “lawyer shopping” across New Jersey in an attempt to find a lawyer to overturn her jail sentencing. Teresa was sentenced to fifteen months in prison after pleading guilty to multiple counts of federal fraud. Before taking a plea deal, Teresa was facing up to fifty years in prison. According to a source close to the reality star, Teresa plans on filing papers in a court this week. The source says:

“Teresa has been meeting with numerous lawyers since being sentenced in 15 months. She believes that more could have been done to persuade the judge to give her house arrest or probation. Several lawyers that have met with Teresa have conveyed to her that under terms of the plea deal she signed, any appeal would automatically be rejected. Teresa was advised that any lawyer telling her the judge would toss out the prison sentence isn’t being honest with her. Teresa plans on filing new financial disclosure forms, fully detailing her financial assets. That time has passed. Trying to rewrite history and now come clean is just too late. It’s astonishing that Teresa would actually do this.”

At the time of Teresa’s sentencing, judge Esther Salas said:

“For a moment, I thought about probation, and house arrest, instead of jail time. For a moment. I considered probation with confinement. But the behavior you engaged in greatly offended the court.”

Judge Salas was speaking of Teresa’s lying on her assets page by listing her jewelry as being worth $0. When asked about this on Andy Cohen’s interview on WWHL, Teresa said that she told her lawyer to put down her engagement ring and wedding band but that he admitted to forgetting in court.

Teresa’s husband Giuseppe “Joe” Giudice was sentenced to over three years in prison for his part in the scandal. He also faces deportation after serving his time. Judge Salas allowed the couple to serve their sentences concurrently so that one parent can be with the children at all times. Teresa will serve first and is set to turn herself in in January to begin her sentence. What are your thoughts? Post your comments below.