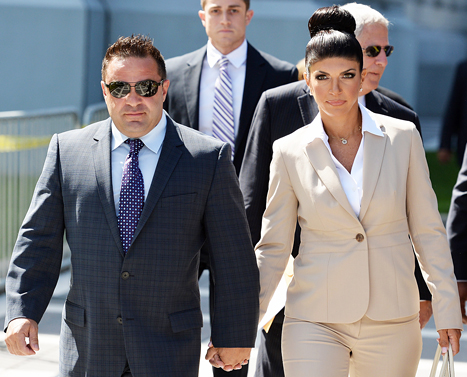 Before surrendering herself at the Danbury, Connecticut federal prison which will be her home for 15 months, Teresa Giudice enjoyed one last meal at a diner. According to the Real Housewives Of New Jersey star’s attorney James J. Leonard Jr. Teresa arrived in Connecticut almost two hours prior to her check in time of 3:00 A.M. so they had dinner at a local Danbury diner called Elmer’s Diner. Mr. Leonard said:

“She said she was hungry, so we went to a diner down the road. It was Elmer’s Diner in Danbury, about a mile away from the prison. Teresa had a simple breakfast sandwich and coffee. She was very stoic. Whatever emotions she needed to get out, she did it prior. She had her game face on — she was ready to go.”

Teresa will be able to visit with her four daughters and husband Joe Giudice this weekend. Teresa was sentenced to fifteen months in a federal correction institute following her and her husband pleading guilty to multiple counts of federal mail fraud, mortgage fraud, and tax evasion. Joe will serve over three years in prison after Teresa is released. What are your thoughts? Post your comments below.