Teresa Giudice, 41, and her husband, Joe Giudice, 43, stars of “The Real Housewives of New Jersey,” have been charged with conspiracy to defraud lenders and illegally obtaining mortgages during a bankruptcy case. 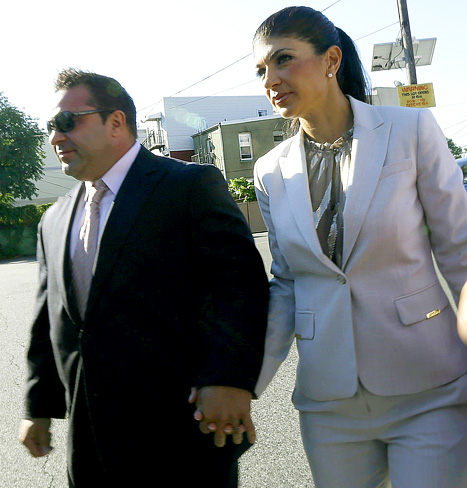 Teresa Giudice and Joe Giudice put on a united front outside of the United States District Court in Newark, New Jersey, on Tuesday, July 30. Arriving hand-in-hand, the Real Housewives of New Jersey stars appeared before Judge Cathy Waldor. Joe slapped a news camera out of his way as he and Teresa made their way into Newark’s federal courthouse.

His lawyer Miles Feinstein told him, “Calm down, Joe. Don’t do that.”

The Giudices were each released on $500,000 unsecured bail bonds. They must surrender their passports and they are not allowed to leave New York or New Jersey until their next hearing, which is scheduled for Aug. 14. During the hearing, it was also revealed that Joe, who was born in Italy, is not a U.S. citizen and could could face deportation if convicted, the judge and prosecutors noted.

An onlooker said the spouses “were very solemn” during the hearing, adding that there were “no tears” and “they were very professional.”

One day earlier, the Bravo reality stars were charged in a 39-count indictment with conspiracy to commit mail and wire fraud, bank fraud, making false statements on loan applications and bankruptcy fraud.

Teresa, 41, and Joe, 43, of Montville Township, N.J., are accused of exaggerating their income while applying for loans before their show debuted in 2009, then hiding their improving fortunes in a bankruptcy filing after the first season of RHONJ aired. The spouses are also accused of submitting fraudulent mortgage and loan applications from 2001 to 2008.

The 39-count indictment, which a federal grand jury returned today, details charges of conspiracy to commit mail and wire fraud, bank fraud, making false statements on loan applications and bankruptcy fraud, which carries a max prison sentence of 20 years, and bank fraud, which carries a max of 30 years. The remaining charges carry the possibility of even more prison time. In addition, authorities say, Teresa Giudice and her husband, Giuseppe “Joe” Giudice, are accused of hiding assets and income during a bankruptcy case.

If convicted, the Giudices parents to four daughters Gia, 12, Gabriella, 10, Milania, 7, and Audriana, 3 face more than 50 years in prison. Why hasn’t Joe filed for US citizenship?

Joe also faces charges of conspiracy to commit fraud when he used his brother documentation to get a drivers allegedly used his brother Pietro’s identity in June 2010 to obtain a driver’s license at the Motor Vehicle Commission office in Paterson. Obtaining a false driver’s license in New Jersey is punishable by up to 10 years in prison. Joe, was indicted on December 20, 2011 by a grand jury and charged with fraudulently obtaining a driver’s license in his brother’s name. He was charged with one count of impersonation and one count of wrongfully using identifying information of another. The plea deal would have capped his sentence to 5 years. The charge of wrongfully using identifying information is punishable by up to 10 years in prison. The impersonation charge carries a maximum 18-month prison sentence. This is very serious, what are your thoughts? Post your comments below.

This is a developing story. More to come.