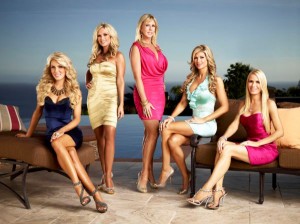 The Real Housewives of season 6 has come to an end, but the cattiness, interruptions, backbiting & grudge-holding has not.

Donn Gunvalson, Vicki‘s soon to be ex-husband records a statement for the show, he blamed a lot of the break up on Vicki, he wasn’t treated very well. Vicki admits she was to blame. I didn’t hear anything about she was sorry and that she tried to mend the marriage with him. She misses wearing a wedding ring and she wants someone to love her although when Donn tried to hug her she was cold and had her hands by herside.

Tamra is questioned about her infamous bathtub scene and that her children haven’t seen it. Alexis butts in and said truthfully that if Tamra was trying to shield her kids she shouldn’t have filmed the bathtub scene. Tamra states her children are not allowed to watch Bravo, it’s court ordered to watch Bravo TV. It’s interesting that Tamra’s children are not allowed to watch her employers. Both Peggy and Vicki thought the tub scene was beautiful. Note that Lisa Wu Hartwell from the Atlanta housewives also taped a tub scene. But I must add there were no nip slips as have been posted online for Lisa’s scene.

Tamra then responds that at least she doesn’t allow her children to fall into a pool, while doing shots, referring to an accident that happened to Alexis’ children last year.

Vicki is dating a new boyfriend Brooks Ayers who is living with Eddie Judge, Tamra Barney‘s boyfriend. How convenient.

Vicki berates Gretchen Rossi, as she states that Gretchen taped her side interview that Vicki planned her hospital incident after she found out what really happened to Vicki. If that is true, that was stupid and insensitive.

Tamra is still talking about Slade Smiley being a dead beat dad, not paying his sons child support (per Radar Online Smiley owes $110,000 in back child support to Michelle Arroyo). After 2 seasons, how is this relevant? If Gretchen wishes to date someone like Tamra is describing, isn’t that her prerogative? Slade is brought to the couch and defends himself and tells Tamra she’s sucking off Eddie, like she did with Simon Barney. Tamra storms off the set as she cannot take the lies. Tamra calls Michelle Arroyo, Slade’s ex-wife on camera. Again what business is this of yours that someone isn’t paying his child support. If what you say is true about Slade and Michelle reached out to you. Just like Jay you should have told Michelle you wanted nothing to do with her situation. Someone bringing drama to you and you diving head first into it, doesn’t make you a hero, it makes you a busybody who appears to want to be in everyone’s business.

Then of course Jeff, Gretchen’s fiance who passed away from cancer, was brought up. Gretchen said she that Vicki did not visit Jeff in the hospital. Vicki, responds she didn’t know Gretchen or Jeff. You are filming for hours on end with a group of women. If you liked Gretchen you would have visited. But saying you are not going to visit someone in the hospital because you didn’t know them to well, is weak.

Vicki also makes a point that Tamra has been married for 16 years, she Vicki 17 years and Alexis for only 7 years. A success marriage isn’t determined by how long you have been married or how many times, but by the fact that you are still married and not belittling someone else’s marriage.

Gretchen tears up and states that she loves Slade and that it’s hard that she loves Slade, but his finances etc,. Gretchen knew exactly what she was getting in to. If she wants to date him. Why is that such a huge point of contention for Vicki and more so for Tamra.

Alexis, dear sweet Alexis. Your husband Jim Bellino, dated someone Peggy Tanous, who was eventually your “friend”. As soon as you all met, the first words out of his mouth should have been “we used to date”. Alexis cannot handle high drama situations and does not articulate well when put under the pressure. Then reading a text from her husband during the taping of the reunion, that Peggy stalked him. Peggy confirmed because he wasn’t answering his phone she went over to his house.

With these ladies, especially with Alexis because her analogies and speech are nervous and special to say the least, she is the least believable and judging from season 6 appears to be competing with Peggy. Tamra explained with great detail on what a shortsale is which is what Alexis and Jim did for their old house. Alexis then said they bought their new house cash. Hmmmm.

Here is some words of wisdom for Tamra, Peggy, Vicki, Alexis, Gretchen & Jeana:

“What you don’t see with your eyes, don’t witness with your mouth – Jewish Proverb

There are a few who shouldn’t come back for Season 7, but I will leave that for another time.

If you wish to donate to the Amazing Gray Fund, a fund raising effort for Slade Smiley & Michelle Arroyo’s son Grayson Alexander Arroyo-Smiley who has Diffuse Fibrillary Astrocytoma (brain tumors) at Amazing Gray

What do you think of the lies, the women, season 7 and the reunion?

More in Real Housewives Of Orange County (296 of 364 articles)