via Florida Today:
Jessica McCarty saw the guns raised and refused to put down her knife.

After weeks of threatening to kill her children and herself, the mother of three was only a bullet away from fulfilling her death wish. Unable to finish the job with her knife, suicide by cop seemed inevitable.

But Palm Bay police had other ideas and McCarty, who had cut herself repeatedly, could not believe when they fired non-lethal beanbag rounds to subdue her.

“I’m so pissed you guys didn’t shoot me with a real gun. I don’t deserve to live,” she told Palm Bay Detective Lewis Jones, according to hand-written notes Jones took as they drove to Holmes Regional Medical Center and while in the emergency room. “I wish I would have finished the job.”

The notes recently became part of public record after the public defender’s office requested them.

McCarty remains at the Brevard County Jail with no bond, charged with three counts of first-degree murder, saying the killings were premeditated. The state is seeking the death penalty.

McCarty waived her right to a speedy trial, meaning nothing is likely to happen before the new year. Some close to the case have said the state has rejected overtures from her lawyers to plead guilty in exchange for life in prison. A spokeswoman for the State Attorney’s Office said they do not comment on plea negotiations.

McCarty had written a suicide note and called police to tell them she had murdered her three children — 5-month-old Christopher, 6-year-old Phillip and 7-year-old Lacey — on March 19 at the Palm Bay home she shared with the father of her youngest child, Chris Swist.

Before her arrest, the 33-year-old had a history of legal trouble and mental health issues. Records show that she was arrested for passing forged prescriptions to feed her painkiller habit and had attempted suicide at least twice before. She also told investigators that she had been raped twice, the first when she was only seven.

She told family members that she and Chris were going through a “rocky patch” in their relationship and that he had asked her to leave.

Lewis paints a disturbing scene in his notes. He describes walking into the house and seeing the movie “Marley and Me” playing on the television. There was blood on both couches, on the cell phone and all throughout the kitchen and living room. He reported McCarty began speaking about 15 minutes later.

She spoke of having planned a “girls day out” with Lacey for Sunday and that now it appeared she would have to miss her brother’s wedding in New York. Then she realized that now she would actually have to live with what she had done.

“I just wanna die. I hope something bad happens and I just die here,” she said, according to the detective’s notes. “Just give me the death penalty, right here, right now. I wanted to stab myself very badly. I’ve wanted to kill myself for a long time.”

But, she said, she wan’t very good with a knife.

Weeks before she had made similar comments to family members, including her brother who went to her house and confronted her.

“I will snap my babies’ necks and take them with me when I kill myself,” she had told family members according to the notes. “I wish I could just kill the kids and myself.”

If convicted and sent to death row, McCarty will get her wish, but only after about 20 years — the average length of stay before someone is executed. 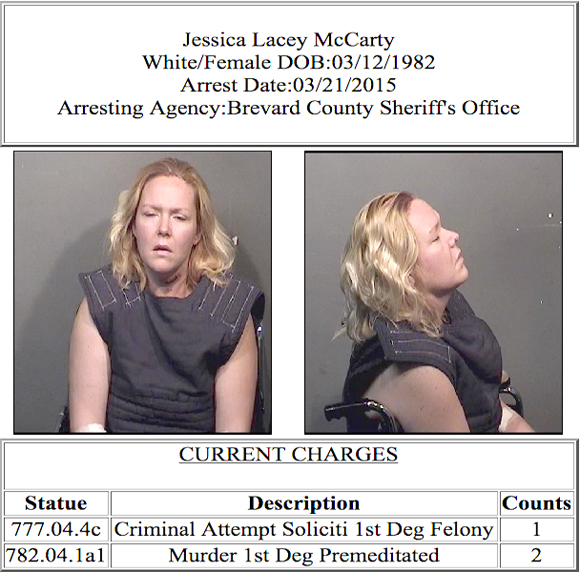