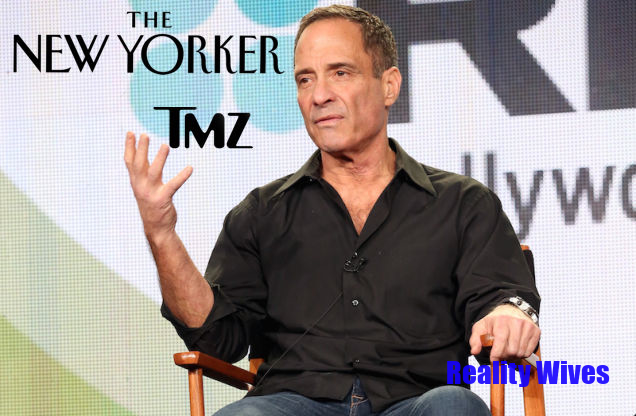 via The Hollywood Reporter:
TMZ honcho Harvey Levin has built a mini-empire on his hyper-aggressive approach to the most mundane of celebrity news, breaking significant national stories (Donald Sterling’s racist rant; the Beyonce elevator fight video) in the process.

But now Levin and his Los Angeles-based enterprise are getting the harsh media spotlight turned on them — and Harvey’s not happy about it. Sources tell THR that The New Yorker is finalizing its own aggressive exposé — more than a year in the works — about the unorthodox reporting tactics of the Warner Bros.-owned TMZ and its controversial founder.

Levin, 64, has been warning TMZ employees both past and present not to speak to writer Nicholas Schmidle, whose résumé might explain why Levin is so nervous. Schmidle’s previous subjects include the hunt for Osama bin Laden (his New Yorker story “Getting Bin Laden” was nominated for a National Magazine Award in 2013), a Russian arms trafficker and war crimes in Kosovo. In addition, The New Yorker has shown a willingness to publish unflattering stories set in the world of media and entertainment. For instance, the Conde Nast-owned magazine’s lengthy profile of filmmaker Paul Haggis’ separation from Scientology by writer Lawrence Wright led to Wright’s book Going Clear and the Alex Gibney-directed HBO documentary that premiered at Sundance and was recently nominated for an Emmy. Several TMZ insiders have spoken to Schmidle anyway, according to sources, as have others in the so-called Thirty Mile Zone around Hollywood from which TMZ took its name.

Levin and TMZ are not often discussed on Time Warner earnings calls, but by most accounts the outlet is said to make tens of millions of dollars for Warner Bros. each year, mostly from the syndicated TMZ newsmagazine television show, which Levin hosts. The former lawyer’s ability to procure court documents, celebrity death and divorce news, sex videos and other unflattering tidbits have led to speculation — especially in L.A.’s legal community, which often grapples with TMZ — that the outlet is paying sources handsomely.

It’s unclear whether Schmidle’s reporting has turned up unsavory (or illegal) tactics used by Levin or TMZ, but sources say Warner Bros. is anxiously awaiting a call from the magazine’s fact-checkers.

A rep for TMZ and Levin did not respond to a request for comment, and a rep for The New Yorker says, “We don’t comment on pieces we haven’t published.”