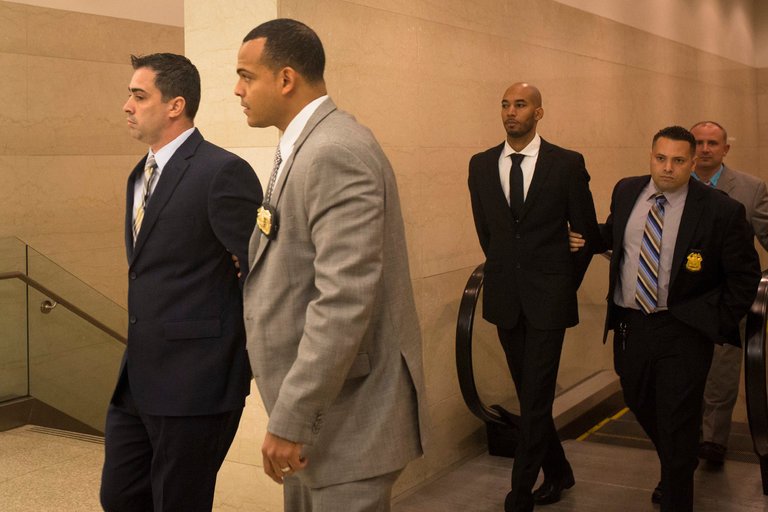 Minutes after two New York detectives stopped an 18-year-old Brooklyn woman last month for having marijuana in her car, they placed her into handcuffs and put her into their police van, prosecutors said. Describing himself and his partner as “freaks,” one of the detectives forced the young woman to perform oral sex on him and raped her, prosecutors said, switching places within moments to let the other assault her, too.

This chilling account was offered in court on Monday morning as the Brooklyn district attorney’s office unsealed a 50-count indictment against the detectives, Edward Martins and Richard Hall, charging them with rape, kidnapping and official misconduct. The indictment marked the district attorney’s office’s first formal statement on the allegations, details of which have been emerging in the news media for weeks.

Detective Hall, 33, and Detective Martins, 37, surrendered on Monday at the 94th Precinct station house in Williamsburg. At their arraignment in State Supreme Court in Brooklyn, both pleaded not guilty and were released on bail. Their lawyers vowed to vigorously fight the charges, arguing that prosecutors had given too much credence to the woman’s “uncorroborated” claims and suggesting that the encounter was consensual.

Even in a city that has seen its share of police corruption — from the systemic graft revealed by Frank Serpico in 1970s to the brutal attack of Abner Louima, who was sexually assaulted in 1997 by an officer wielding a broomstick — the allegations against Detectives Hall and Martins were remarkable for both the viciousness of the crimes and the raw abuse of power.

Typically, when officers are charged with crimes, their colleagues come to court in a sea of blue uniforms to support them. But on Monday, not one officer appeared in court with Detectives Martins and Hall.

According to a detailed account delivered by a prosecutor, Frank DeGaetano, the incident occurred on Sept. 15, when Detectives Hall and Martins were conducting operations in the Coney Island neighborhood as part of an antidrug unit, Brooklyn South Narcotics. Around 8 p.m., Mr. DeGaetano said, the detectives broke off from the rest of their team and stopped an Infinity coupe in Calvert Vaux Park. The 18-year-old woman was driving, he said; two of her friends, both men, were also in the car.

As the detectives — both in plainclothes — approached the car, one of them shined his flashlight through the window and saw the young woman adjusting her bra. When Detective Hall asked if she was hiding something, she told him she was simply adjusting her nipple piercing, Mr. DeGaetano said. The detectives asked her to prove it, and the young woman lifted up her shirt, showing them her breasts.

A search of the car revealed a small amount of marijuana in a cup holder. The woman also had some marijuana and a few pills of Klonopin, an anti-anxiety drug, in her handbag, Mr. DeGaetano said. At that point, he added, the detectives took the woman from the car, placed her in handcuffs and put her into the second row of their Dodge police van. Driving off, they told her that she would be released within a few hours at the 60th Precinct station house.

Mr. DeGaetano said that Detective Martins used his cellphone to call the woman’s friends and explicitly instructed them not to follow the van, using a blocking function to disguise the number he was calling from.

By that point, Mr. DeGaetano said, the van was in Bay Ridge, at least four miles from where the antidrug team had been working. Mr. DeGaetano said that Detective Hall switched places with his partner and also forced the woman to perform oral sex on him.

After the attack, Mr. DeGaetano said, the detectives returned to Coney Island and dropped the woman off about five blocks from their station house. Before she left, they made her take one of her Klonopin pills and told her to “keep her mouth shut,” Mr. DeGaetano said.

Within days, the city medical examiner’s office had analyzed a rape test performed on the woman and determined that it contained samples of both detectives’ sperm, Mr. DeGaetano said. “These are extremely serious charges,” he added, saying that each could face up to 25 years in prison.

Even with physical evidence like DNA, rape prosecutions are often difficult. A court document filed on Monday hinted at some of the vulnerabilities defense lawyers may seek to exploit.

Calling the indictment “schizophrenic,” John Arlia, a lawyer for Detective Hall, noted at the arraignment that the charges included accusations of both “forcible” rape and of using sex to bribe a police officer — a “self-contradictory” position, suggesting that the prosecutors had two theories of the case and were not entirely confident about the young woman’s account.

Mark A. Bederow, Detective Martins’s lawyer, said his client had been subjected for weeks to a “circus” of allegations made in the media by the young woman’s lawyer, Michael David. Mr. Bederow called the woman’s account “uncorroborated.” He told Justice Danny K. Chun, who is handling the case, that while prosecutors had furnished DNA evidence, they had not provided surveillance footage connected to the attack, which allegedly took place in the parking lot of a Chipotle restaurant, nor of the detectives releasing the woman near the station house.

Mr. Bederow added that he had “substantial information” that would undermine her story, suggesting that she had a “financial” motive to lie about the attack.

At a news conference after the arraignment, Eric Gonzalez, the acting Brooklyn district attorney, asked anyone who may have had similar encounters with the detectives to come forward. He also condemned the detectives’ lawyers for attacking the victim.

“It is shocking and unfortunate that they would blame a teenager for the acts of their clients,” Mr. Gonzalez said. “To think that these are grown men in a position of power over an 18-year-old, and for them to blame her, is ridiculous and demeaning. To my mind it speaks to desperation.”

An earlier version of this article misstated the details of the accusations against Detective Richard Hall. He was indicted on charges of forcing oral sex and acting in concert with the alleged rape of the 18-year-old woman by Detective Edward Martins; he has not been accused of raping the woman.