She speaks to the Daily Mail about her famous grandson.

On Blac Chyna
“We all love Kylie and think she is so much better for Tyga than Blac. Yes she is King’s mum, but Blac just wasn’t a very nice person and Kylie comes from a much better family. She is such a sweet, lovely girl and seems to adore Tyga. So we didn’t mind him splitting up from Blac. It was a relief for us all.

On Kylie:
“She loves Vietnamese food, so we love to cook it for her whenever Tyga invites us to his home. Blac used to live there, but now it is where Tyga lives with his son King and Kylie is round there all the time. I’m not sure when King sees his mum, but Tyga is a great dad and has never seemed happier, now he is with Kylie. King is at such a fun age and never stops talking. He is gorgeous.”

On the age difference:
“No, Tyga is only a baby himself, so we don’t see what the problem is. All we care about is that she is a lovely girl, from a well educated family who are a great influence on Tyga.” 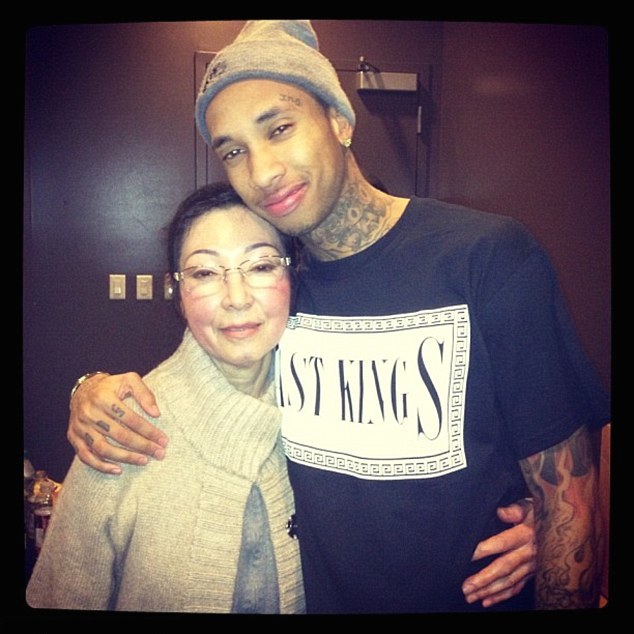 At first there was an attempt to keep the relationship between Tyga and Kylie Jenner’s quiet, now Tyga, 25, is telling friends he doesn’t care about the law and loves Kylie, stating she’s, ‘a millionaire who runs a company and even owns her own home.’

Tyga whose real name is Michael Ray Nguyen-Stevenson and Blac Chyna, real name Angela White, were a couple from 2011 when she appeared in his ‘Rack City’ music video. They welcomed their son King Cairo in 2012 and in December of that year the 26-year-old confirmed their engagement.

Blac Chyna used to be one of Kylie’s big sister Kim’s best friends. But after rumors of her fiance’s relationship began with Kylie, their friendship ended.

Blac Chyna recently posted texts from Tyga who was begging for a reconciliation. But that does not seem to have phased Tyga and Kylie.

Speaking from her apartment in LA, Kim, who is Vietnamese and the mother of Tyga’s mum Pasionaye, said: “Tyga adores Kylie and has introduced us to her lots of times.”