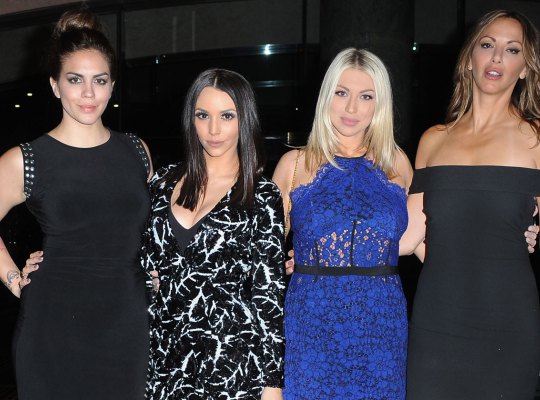 Vanderpump Rules has just started filming the show’s 6th season, and the cast is already stirring up drama.

RadarOnline.com can exclusively reveal that Kristen Doute rekindled her friendship with nemesis Scheana Marie — and now the 34-year-old reality star is also on the outs with former besties Katie Maloney and Stassi Schroeder!

“Kristen is still very close with Scheana, and the girls don’t agree with that,” a cast insider revealed to Radar exclusively. The ‘Witches of WeHo’ are not thrilled that their third member is hanging out with their enemy.”

“Scheana has barely spoken to Katie and Stassi since filming last season, and she has been spending time with Kristen,” the insider revealed. “They had a girls’ night recently singing karaoke with Scheana’s other friends.”

The insider revealed that the alliance divide began on Schroeder, Maloney and Doute’s trip to Europe, where “Katie officially became a bully like Stassi,” and “ganged up on everyone including Kristen!”

“Stassi and Katie are closer than ever,” the source added. “Stassi knows the more she spends time with Katie, the more air time she’ll get on season 6.”

Schroeder, 28, and Maloney, 30, have been feuding with Marie, 32, since she rekindled her friendship with Lala Kent, 25. Kent “fat-shamed” Maloney on the show, which the women found unforgiveable.

Meanwhile, Marie is still trying to convince her new boyfriend, Robert Parks Valletta, to film with her after her ex-husband Mike Shay decided to quit the show for good.