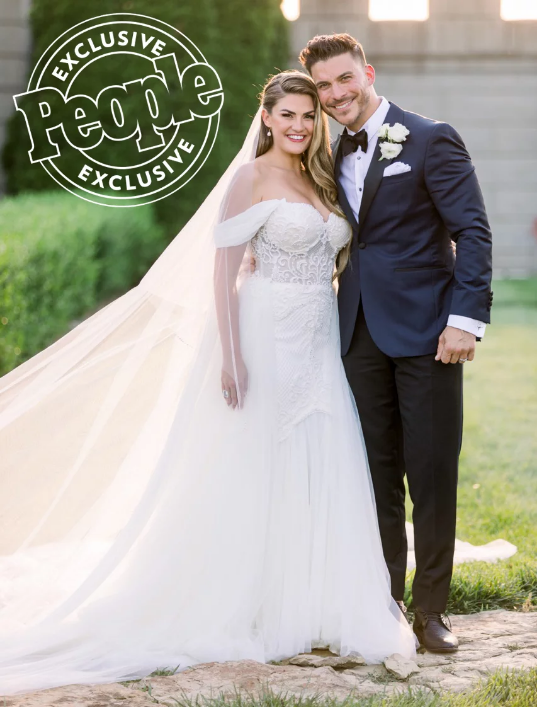 “It feels amazing,” Cartwright told PEOPLE exclusively just before the big day. “We’re stronger and happier than we’ve ever been. We’ve been through a lot, but we came out on the other side. I feel like we’ve just gotten stronger and stronger.”

And Taylor couldn’t wait to make her his wife, saying, “We know we love each other. We know we want to be together. We’re just really excited. Just really happy with where we are right now.”

Taylor, 39, and Cartwright, 30, said “I do” in a magical, fairy-tale themed ceremony in front of 240 guests, including their reality show costars and Bravo-leberties like Southern Charm’s Shep Rose and Summer House alumni Lauren Wirkus and Stephen McGee. They exchanged wedding bands by Kyle Chan (the same designer behind Cartwright’s jaw-dropping engagement ring). 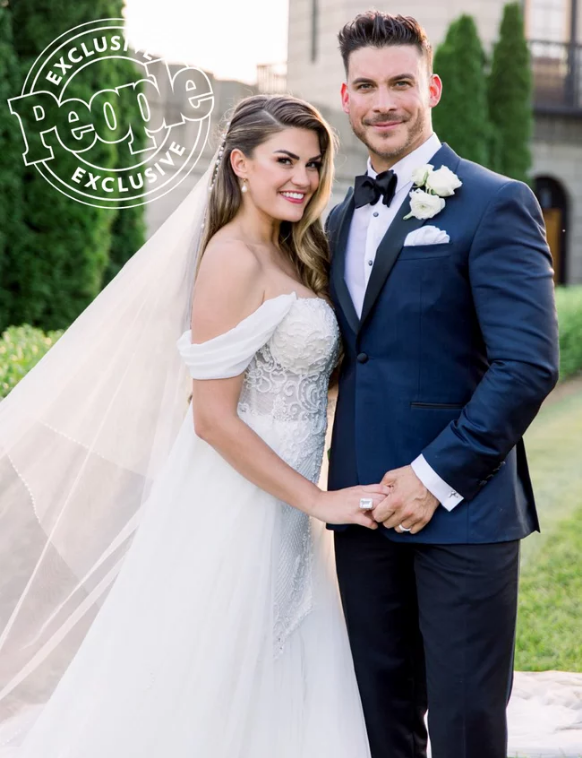 Cartwright felt like a princess in a Netta BenShabu gown that transformed into three different looks throughout the night, while Taylor opted for a tuxedo by Jack Victor. The 12 bridesmaids (including castmates Scheana Shay, Ariana Madix, Stassi Schroeder, Kristen Doute, Lala Kent and Katie Maloney-Schwartz as matron of honor) wore blue dresses from Wtoo by Watters, and 13 groomsmen (with Tom Sandoval and Tom Schwartz as best men) wore Jack Victor as well. The bridesmaids received robes, slippers, sleep masks and more from the Victoria’s Secret Bridal Collection, and the groomsmen were gifted Givenchy sunglasses by Trendsavvy.

The bride’s “glam-ily” will keep her fresh in the southern heat, with hairstylist Bradley Leake loosely curling her waves and makeup artist Jared Lipscomb enhancing her natural look.

Lance Bass officiated the ceremony in the courtyard, surrounded by white, champagne and ivory-colored flowers. The ‘NSYNC boy-bander, 40, is also the groom’s business partner.

“He’s become one of our really, really great friends, and he has really stepped up for us in this moment when we needed somebody. He stepped up and is such a nice, kind person,” Cartwright said, adding that SUR restaurateur Lisa Vanderpump is “obviously is so happy that Lance is doing it for us.”

The Real Housewives of Beverly Hills star, 58, was originally asked to officiate the couple’s wedding but was unable to due to her mother’s sudden death. However, Vanderpump pulled off the ultimate surprise for Cartwright and Taylor ahead of their special day. “Lisa and [husband] Ken made it to the wedding and surprised Jax and Brittany,” their rep tells PEOPLE. “They were ecstatic and so touched. It was emotional.”

During the ceremony, Cartwright’s dad said a prayer and gave a blessing. “I wanted to make sure that even though we weren’t having a pastor officiate the wedding that my religion was still very much involved, and Jax’s as well,” the bride said.

Wedding planner and floral stylist Mitchell Christian, as well as publicist Lori Krebs, brought the bride’s childhood dream of a storybook affair to life, with rentals provided by Bryant’s Rent-All. 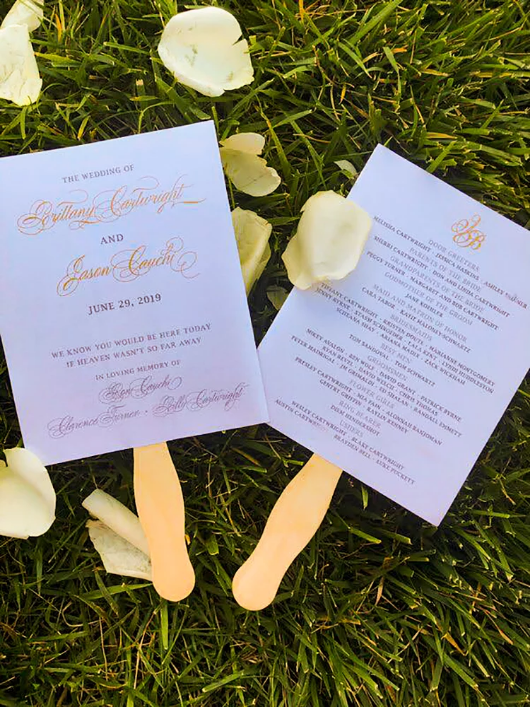 Although Taylor’s father, Ronald Cauchi, died of cancer in December 2017, his presence was felt as the bartender wed his bride. The couple kept an open chair in his memory, along with a photo, flowers and his ashes. The wedding program included tributes to Taylor’s dad and Cartwright’s late grandpa, printed with the quote, “We know you’d be here today if heaven wasn’t so far away.” (The invitations, seating cards, etc. were by Printcess Design.)

Predicting his emotions on the big day, Taylor said, “It’s really, obviously bittersweet. My parents won’t be there. That’s just the hard part about it, but it’s obviously a big day in both of our lives. We’re both very, very excited. I’m very excited. We’re eager to get going.” (Taylor has been estranged from his mother since his father’s death.)

During the cocktail hour, guests explored the castle and its grounds, admiring a pool filled with floating candles as a live band played. They munched on passed appetizers like crab cakes and Kentucky hot browns (a local dish involving bacon, turkey, gravy and tomato) and sipped signature cocktails: one a strawberry tequila drink, and the other a blue beverage incorporating Kentucky bourbon and blueberries.

For the reception, guests moved into the property’s greenhouse, decorated with gold chandeliers and bright sunflowers. Dinner was filet mignon, chicken cordon bleu or exotic mushroom ravioli. They toasted the couple with blue champagne, to match the bridesmaids’ gowns, and cut a cake by Martine’s Pastries.

The party didn’t end there: Everyone moved into the castle’s ballroom for a late-night party, dancing to a DJ and noshing on food from Hooters, where Cartwright was employed when she met her future husband in Las Vegas.

“I just knew it was meant to be,” Taylor said of their first encounter.