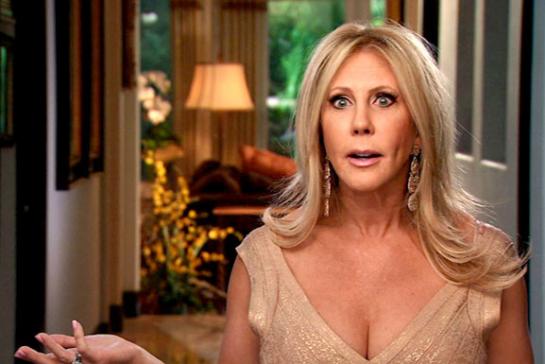 via Radar Online:
Vicki Gunvalson is single and ready to mingle! The feisty Real Housewives of Orange County star has been roundly criticized for her roller coaster relationship with bad guy Brooks Ayers. But Radar Online.com has exclusively learned that after years of monogamy, she’s finally playing the field by dating at least two men and is open to dating more.

“Vicki is out having a good time,” a friend of the reality show grandmother revealed. “She’s dating a couple of guys, at least two, and she’s not going to say no to any good men right now.”

Despite the bad blood between the two, it seems like the Bravolebrity just can’t quit Ayers.

“She is not living with Brooks, she is not engaged to him, in fact she’s not even in a committed relationship with him, but she is definitely dating him,” the source told Radar.

And what about attorney John Pankauski, the man Radar exclusively revealed to be Gunvalson’s new beau?

“Vicki is dating John too. She’s not tying herself down to any one man,” her friend bragged to Radar.

Traveling the country promoting her new Diamonds by Vicki line, the reality star has found herself to be the center of attention and on the receiving end of multiple propositions.

“Every time Vicki is out in public men come up to her and say ‘Now that you’re single I’d like to be your boyfriend’ and she finds that really flattering.”

As for her relationship status, the source told Radar: “Vicki wants to be out there just dating. There are a lot of great men and she wants to meet and date as many of them as possible.”

More in Real Housewives Of Orange County (179 of 364 articles)