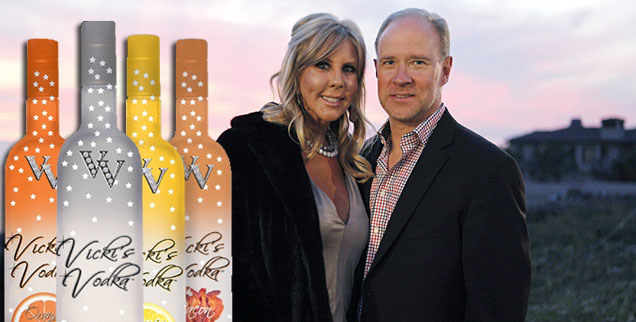 via Radar Online:
Vicki Gunvalson is facing, yet again, a multi-million dollar lawsuit over her contentious “Vicki’s Vodka” product after her disgruntled business partner filed a new lawsuit in Nevada.
Robert Williamson III, a professional poker player who went into business with the Bravo reality star in 2012 to produce distilled flavored vodka, filed the suit against the 51-year-old Bravo star on Friday, alleging she breached a settlement agreement the pair had hatched to end his initial litigation against her.

He is facing, independently of his reality star girlfriend, claims of defamation and extortion.

Gunvalson gifted 16.67 percent of the Vicki’s Vodka business to Ayers without the knowledge of her business partner Williamson, it’s claimed, who then sold it back to Williamson for $50 thousand because he supposedly needed the money for unpaid IRS and child support obligations.

Here are some accusations from the suit:
“During the weekend of July 12, Vicki and RW III met, without counsel, for extensive meetings and negotiations,”

A settlement agreement was reached and the Bravolebrity signed it on July 15.

“Following the execution of the agreement, RW III caused Vicki to be dismissed without prejudice for certain pending litigation pursuant to the settlement agreement”

But, “almost immediately following the dismissal of Vicki from the federal litigation, Vicki disregarded the settlement agreement and breached the same.

“In reality, Vicki had no intention of abiding by the terms of the settlement agreement and had merely used the entire exercise as a means to solve certain problems, including her dismissal from the federal litigation.”

According to Williamson, by August 9, Gunvalson’s lawyers began to send emails to “assert positions contrary to the settlement agreement.”

He said Gunvalson and Ayers “conspired to work in concert to obtain money” from him and “deprive him of ownership interest” in the business.

Other defendants in the lawsuit include Michael Nicholson, a Napa Valley, Calif., businessman who Williamson is suing for an array of claims, including misappropriation and conversion of funds.

Obviously there is no honor among thieves. What are your thoughts? Post your comments below.

More in Real Housewives Of Orange County (203 of 364 articles)