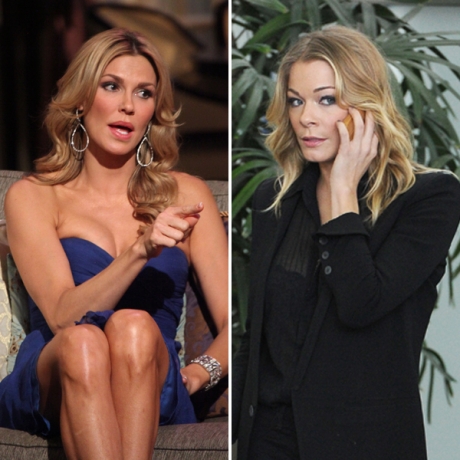 In what would be ratings gold and a reality dream come true, although a nightmare for Brandi Glanville. Remember I tweeted this once Brandi joined the Real Housewives Of Beverly Hills. According to Radar Online, Leann is being hotly pursued!

“Producers have approached LeAnn multiple times about joining the cast and have been pursuing her even harder in recent weeks. Viewers are fascinated by Brandi, how she’s dealt with her marriage being broken up by LeAnn, and the pain that continues to cause her and her family.”

“Executives at Bravo have told LeAnn that appearing on the show would be a great opportunity for her to get her side of the story out and no longer be seen in a negative light. However, she has continued to shut the offers down, claiming she doesn’t want the added drama in her life, that she has a flourishing music career, and that she just doesn’t need to do a reality television show.”

I think I’m in the minority, but I think it was be marvelous if the home wrecker joined – to speak her side on all of Brandi’s allegations. But of course this is just a rumor and Eddie probably wouldn’t allow Leann to join.

Allegedly Brandi and Lisa are the only guaranteed cast members to return for season 4. What are your thoughts? Post your comments below.

Brandi Glanville on Howard Stern: My Co-Stars Are “C**ts”

Brandi Glanville’s Boobs Steal The Show At The Oscars

More in Real Housewives Of Beverly Hills (552 of 795 articles)

Brandi Glanville on Howard Stern: My Co-Stars Are “C**ts”