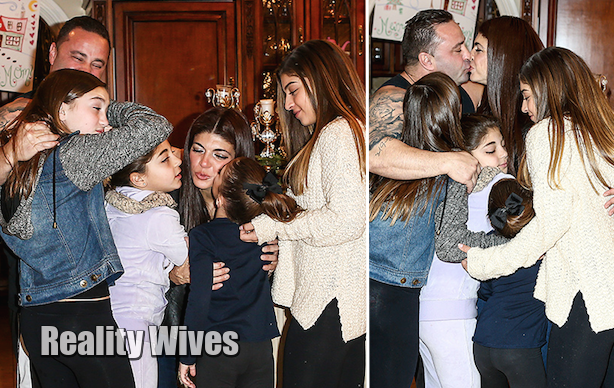 There’s no place like home for the holidays – just ask Teresa Giudice, who was emotionally reunited with her family on Wednesday.

Only PEOPLE has the intimate photos, shared by the Giudice family, of the moment Teresa was welcomed home by Joe and her four daughters.

The reality star arrived back in New Jersey at 7:30 a.m. after being released from the Federal Correctional Institution in Danbury, Connecticut, following a nearly year-long sentence for fraud.

Giudice’s attorney, James J. Leonard Jr., told reporters outside the star’s family home that she had a “very emotional, very private” reunion with her husband Joe and daughters, Gia, Gabriella, Milania and Audriana.

The family was “anxiously anticipating her arrival,” a source tells PEOPLE, and “Joe was waiting for her in the driveway smiling.”

Joe gifted the star a brand, new black Lexus SUV, which was waiting in the driveway with a big red bow when she pulled up.

For more exclusive images and details of Teresa Giudice’s first days home, pick up the upcoming issue of PEOPLE, on stands Dec. 29.