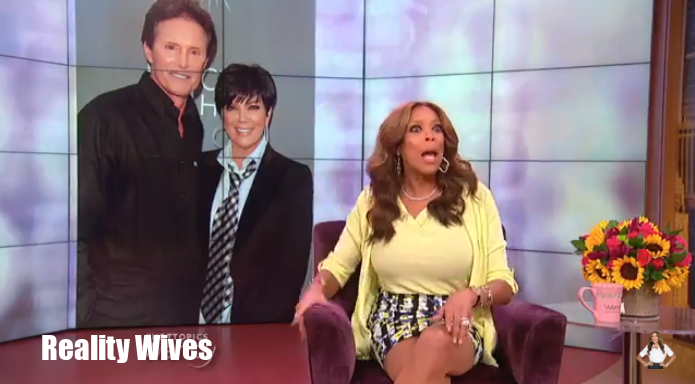 As always Wendy Williams gives her unadulterated opinion about Bruce Jenner and his transition on Thursdays episode of her it show The Wendy Williams Show.

Here’s a part of the transcript for Thursday’s episode of Wendy Williams where she talks about Bruce Jenner and a few other celebrities.

“You’re going to be shocked that I say this to you and I’m nosy. I’ve almost made a thirty year career of telling you what I’m nosy about and giving an opinion. But I’ve reached a point with Bruce where even if I was home the only reason I’d watch, is that I know that on Monday, this is the biggest story, I have to watch. If this wasn’t an obligation due to my career I wouldn’t watch. But let me tell you why I wouldn’t watch, I wouldn’t watch because I feel duped by Bruce. I’ll tell you why, because when we started watching that show with the *whistles KUWTK theme tune*, and they were all cute. And then that woman would boss Bruce around, and the girls would run roughshod over him and I, I’m sure I’m not the only one who felt compassion for Bruce. He was supposed to be the rock of the family and I don’t feel duped because he’s turning into a woman. I feel duped because he’s the same fame whore, as the rest of the family. I feel duped.”

“And so because of that if I was just Wendy the common citizen and not Wendy the talk show host, that has to watch this. If I didn’t have to watch this, I wouldn’t watch it. That’s how I feel. And I’m pissed at Bruce because he was supposed to be the rock and so solid, he’s the one that wrangles the girls when they do too much. Bruce has a daughter who’s 17 and is involved with a 25 year-old father of one and she’s a high school dropout and she’s messing with her face and her boobs and her behind way too early in life. Bruce has bigger fish to fry, than turning into Belinda. I’m all for and very happy for anybody that lives in their own truth including Bruce transitioning, But he should have thought about that before having all the kids. You’ve got kids to explain this to. You can’t tell me that Kylie is not the only one going along with this. Belinda shame on you.”