Duck Dynasty reality star Willie Robertson and his wife have inspired millions across the world with their outspoken belief in Jesus and leading by such a positive example. The team at RealityWives.net loves Duck Dynasty it’s an awesome and hilarious show! Our love of the Robertson’s was only intensified by their love of God, especially in a world where Christianity and Reality TV don’t mix. Duck Dynasty changes all of that. Check out this video where Willie Robertson shares his amazing, Godly perspective on why adoption is so important and how God lead him and his wife to adopt their biracial son. Hollywood never saw these guys coming!


Willie and Korie’s adopted son, “Lil Will,” has appeared in some episodes of the show. The couple, who have known each other since they were young children, are raising daughter Rebecca as a foster child, after having hosted her initially as an exchange student. Willie and Korie’s biological children are John Luke, Sadie, and Bella.

In Korie’s Twitter bio she calls herself the “proud wife” of Willie, and touches on their unique family situation: “Mom to four awesome kids plus a sweet exchange student who became ours. Love my big family. Thankful. God is good.” 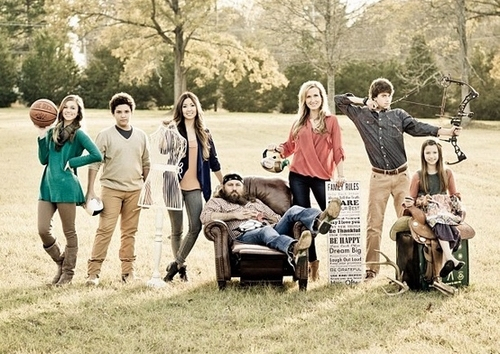 Willie’s proud wife recently tweeted about the “Duck Dynasty” Christmas special, and posted a photo from “Christmas past,” which shows all five kids together with their parents.

Duck Dynasty Cast Before the Beards