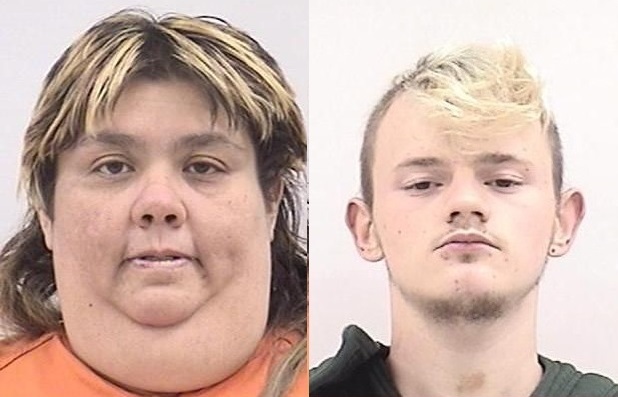 via KKTV:
A married couple allegedly took on the role of “Grinch” this Christmas season and stole Christmas displays from dozens of Colorado Springs families.

Jeremy Lewallen, 18, and his 42-year-old wife Carrie Carley were arrested Dec. 19. Police say they used the displays they swiped to decorate their own yard.

According to the arrest affidavit obtained by 11 News, a neighbor who had his decorations stolen was driving around his neighborhood when he spotted a very familiar looking Christmas display in the suspects’ front yard. Police served a search warrant there and allegedly found, in the words of one of the theft victims, “a decoration graveyard.” Officers said that both the front and back yards of the home were filled with stolen lawn ornaments and Christmas decorations.

The arrest papers say that the couple admitted to stealing about $2,000 worth of decorations. The papers then go on to say that when police asked Lewallen about stealing from families, he “chuckled” and said he didn’t care about who he affected when he stole from others.

The man accused of stealing Christmas from others is still behind bars as of Christmas morning. His wife, however, has bonded out and spoke to 11 News Christmas Eve night. She maintains that her husband acted alone.

“Every morning he’d go out for a walk, at like 2 or 3, and then there was just more stuff in the yard,” Carley said. “I didn’t know exactly where it all came from.”

Echoing officers’ account in the arrest affidavit, she said her husband was equally glib when she confronted him.

“He…I guess he still thinks it’s a game. He doesn’t seem to care really one way or another. … I asked him, and he was like, ‘Well, this is my job.’ And I’m like, ‘Taking from unassuming people is your job?'”

When asked if her husband knew he allegedly hurt a lot of people, Carley said he didn’t care.

“It doesn’t seem to affect him,” she said.

According to Carley, Lewallen also spent time in jail in November for stealing Halloween decorations. 11 News reporter Dustin Cuzick asked her why, then, seeing Christmas decorations pop up in her yard wouldn’t have raised suspicion.

“I just didn’t know what to do, you know, I didn’t know if I called if I was going to get in trouble myself or not, you know, because it was in my yard.”

The couple faces felony theft charges, which Carley said she is going to fight. The stolen decorations have been returned to their rightful owners.

Carley apologized to the victims.

“I’m very sorry this happened…it shouldn’t happen to anybody and I am very sorry. I don’t know hat else I can do to make your Christmas feel any better, but I am truly sorry.”