The footage below is of a woman, Josephine Majani, at the maternity unit of the Bungoma District Hospital giving birth on the floor. Where she was assisted by two nurse ratchets.

As if that was not enough, nurses ratchet A & B, who were filmed at the scene soon after the delivery were seen slapping her and ordering her to walk to a ward “to finish the delivery process.”

The disgusting video was filmed by another expectant mother on her mobile phone. After seeing the ordeal of the woman in labor, she chose to go and deliver elsewhere after the traumatizing experience. I don’t blame her. What wickedness is this? 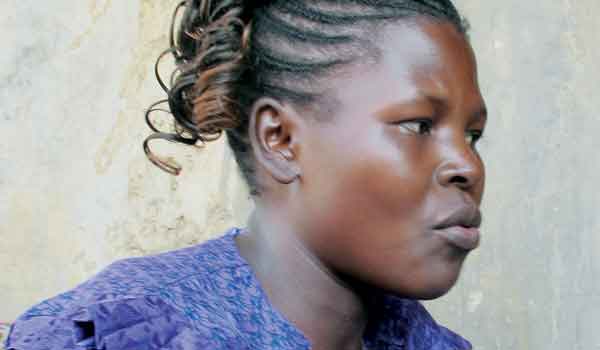 Mrs Majani, (pictured above), who was interview by The Standard on Sunday was breastfeeding her now one-month-old baby, said she couldn’t remember having been mistreated at the hospital, but after she was shown the raw video footage of nurses slapping her as she lay motionless on the floor, she emotionally opened up.

“If this is actually what those nurses did to me after I had passed out, then may God forgive them. I had been coached to disown what is being shown here but it is all clear now before my own eyes,” she said.

She said after the doctors took her back to the hospital, she was given a prepared statement to deny that anything had happened, that she read out to a local FM Station denying having ever been mistreated at the hospital.

“I didn’t know what happened but after watching this, my appeal is to the Government to take action against those who mistreated me. This will send a message to their type in other public hospitals,” she said.

Her husband, Ramadhan Majani said: “It’s true she was taken to the hospital yesterday and I was even quarrelling her why she did that without informing me. She later told me the doctors wanted her to assist them recant a story that had been running all over media houses.”

Dr George Wanzala of Bungoma District Hospital, who is in charge of the investigation into the matter, said they did not coach her on what to say, but wanted to hear from her what actually transpired as part of the probe.

“We are sorry we didn’t inform the husband in time. This might have made him believe we were coaching the wife. This is not true. We are on top of the investigations and we merely wanted to hear the mother’s side of the story. Which is greatly assisting us,” he said.

Following the KTN expose, three nurses who were on duty on the night of August 9, when the incident happened, have been suspended to pave way for investigations as more Kenyans continued to condemn the incident. What are your thoughts? Post your comments below.