Woman Files For Divorce Because Of Husbands Poor Table Manners – NOT Eating Peas With A Fork! 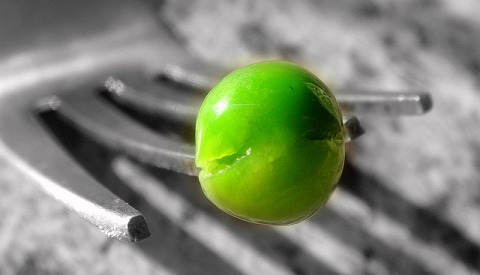 via Gulf News:
A woman in Kuwait has filed for divorce one week into her marriage after she discovered that husband did not like to eat peas with a fork and preferred to use bread. Accusing him of failing to abide by table manners and proper eating etiquette, she said that she was disgusted by the “shocking sight” and could not stay with her husband the rest of life and wanted a divorce, local daily Al Qabas reported on Monday.

The case was among several instances where the breaking point and the reason for divorce were not the familiar issues of abuse, infidelity or lack of communication, but rather unusual attitudes and odd limits where to draw the line in marriage, the daily said.

In another case, a woman told her lawyer that she wanted to divorce her husband for insisting on squeezing the toothpaste tube in the middle and not the end.
“We are always arguing,” she reportedly said. “I keep telling him that he should squeeze in the end of the tube, but he stubbornly refuses and keeps squeezing it in the middle. He is so obstinate.”

In another divorce issue, a man divorced his wife after she refused to bring him a glass of water, arguing that there was a domestic helper who could do it.

The husband reportedly asked her a second time, but she again refused and in the ensuing argument, he told her that their married life was over and that he was divorcing her.

According to Kuwaiti legalists, the non-acceptance of the other is the major reason for divorce in the country.

“One critical issue is that many spouses should use their engagement period to know each other well enough to decide whether they should go on with their union,” one legalist said. “The traditional times when spouses really met each other after their marriage are over, so there are now good opportunities to know the future life partner and decide whether he or she is the right one.”

In some cases, there is no genuine intention to turn the marriage into a family institution and a part of the social fabric, the legal sources told the daily.
In such instances, future spouses do need psychological, social and legal guidance to help them make their decision, they said.