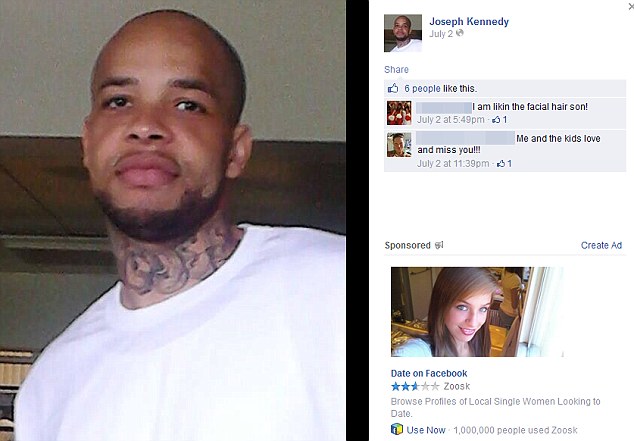 via ARKANSAS MATTERS:
A woman discovers her sister’s killer on Facebook taking photos inside prison. The inmate’s photos show details you could only see behind bars, sparking an investigation by prison officials at the Varner unit.

About a month ago, Doris Reeves says she logged to Facebook to see photos of her grandchildren when a post suggested someone she might know. It was of photo of the man serving a life sentence plus 40 years for the kidnap and murder of her younger sister, Karen Yarbrough.

“She loved people, she loved life,” Reeves says about her sister.

In June of 2001, police arrested Joseph Kennedy for her murder.

Once Kennedy pleaded guilty, Reeves followed his status through the Department of Correction’s website, but was shocked when she stumbled upon his other profile on Facebook in 2014.

“The tattoo across the neck, it’s really wide, the white t-shirt, it just clicked,” she says. “It just makes me so angry something needs to be done. “

KARK asked department officials how a convicted murderer could update a Facebook profile with photos wearing his state issued uniform inside prison.

“We are still investigating what happened in this case, it is obvious the inmate was able to get an electronic device and get on Facebook,” says Shea Wilson.

Inmates are banned from using cell phones. Still, officers confiscate roughly 300 each year. So many, that in 2013 ADC donated a thousand phones to a program for soldiers.

“We do routine sweeps of our prisons and we turn up all types of electronic devices,” says Wilson.

While officials battle contraband, Reeves is fighting to honor her sister’s memory and protect other families from the same shock on social media.

“It would mean everything to me just to get it down,” she says.

Reeves says she has been trying to get the profile removed for a month. ADC says without the user name and password officials can’t take it down.

KARK reached out to Facebook about this issue and a spokesperson responded with the following statement.

“If we receive a report from the department of corrections that an inmate is using Facebook in violation of local laws or the regulations of the prison facility, the page would be deactivated. “

ADC’s investigation into Kennedy’s profile is ongoing. If found guilty of having a phone behind bars, he could lose good time and one year of phone use.