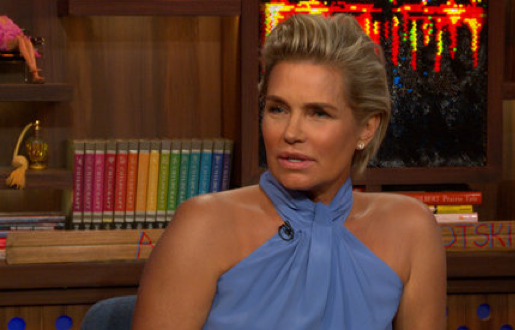 No one saw Yolanda Foster and David Foster’s split coming—not even Yolanda herself.

After four years of marriage, the couple announced their breakup via a joint statement on Dec. 1, 2015, the same day Bravo’s the Real Housewives of Beverly Hills returned for its sixth season. Many of Yolanda’s fellow cast members were shocked by the news, as they’d never seen signs of turmoil. But, as the Dutch model explained on Watch What Happens Live Tuesday, “I didn’t know it was ended until Nov. 15. We had already wrapped shooting and the show as done.” Asked where she and David stand today, she said, “We are in touch a little bit, here and there.”

So David just up and left, filed for divorce and said, “We’re over”? Really?.

Host Andy Cohen also aired a preview of the upcoming Real Housewives of Beverly Hills reunion, where he questioned whether Yolanda’s Lyme disease played a role in her divorce. “You can’t underestimate how much it takes for a man to take care of somebody that’s sick all of the time. David didn’t change; I’m the one that changed. And I guess this is the outcome of that,” Yolanda said. Asked about the criticism David received “for not wanting to be with you while you were sick,” she defended him, saying, “I don’t think anybody should criticize that.”

“Did you feel blindsided?” Andy asked.

“Yeah,” Yolanda admitted. “I didn’t think that was the end of the road.” Even if they didn’t go the distance, the timing wasn’t right. “I would have hoped to wait until I got 100 percent well.”

David, for his part, issued a statement on Dec. 22 addressing that very issue. “Over the past few weeks, a great deal of inaccurate or baseless information has been reported claiming to represent my thoughts and feelings. It is painful to watch this happen repeatedly—especially while trying to cope with the personal nature of the challenges surrounding the breakup of our loving marriage,” the music producer told E! News at the time. “I have always had and continue to have the utmost respect and love for Yolanda, which is why it is so frustrating to see headlines questioning her chronic debilitating illness. I have been by Yolanda’s side over the past four years to the best of my ability as she battled with the complexities of her Lyme diagnosis. I am incredibly proud of Yolanda’s determination and mission to find a cure, and how brave and open she has been by sharing her story in the hopes of changing the future for others.”

And, as Yolanda confessed to cast member Erika Girardi in Tuesday’s finale, David will always have a place in her heart. “We were just two normal human beings that were going through the ups and downs of a marriage while [battling chronic illness,] business, children, step-children, life. It was just really tough. If you stop making each other happy, you shouldn’t be together. My life has changed 180 degrees. In time, David and I are going to be great friends. Just because the marriage didn’t work anymore, it didn’t change the fact that I still love him.”