“I would have loved a more graceful exit then “Season 6″ but sometimes we don’t get to control the ending of the chapters in our life………… I am leaving what’s over without denying its past importance in my life. I believe that every exit is an new entry and with that in mind I say goodbye to my @Bravotv Family as I continue to focus on a my recovery, my children and bring back the privacy within our Home……….. Thank you to all the fans for your love and unwavering support these past 4 years. I am grateful for the housewife experience and all it has thought me. I’am excited about this choice and look forward to the next chapter of my life……………… #RHOBH #TimeToSayGoodbye with #Gratitude @evolutionusa @bravoandy @bravotv #WWHL” 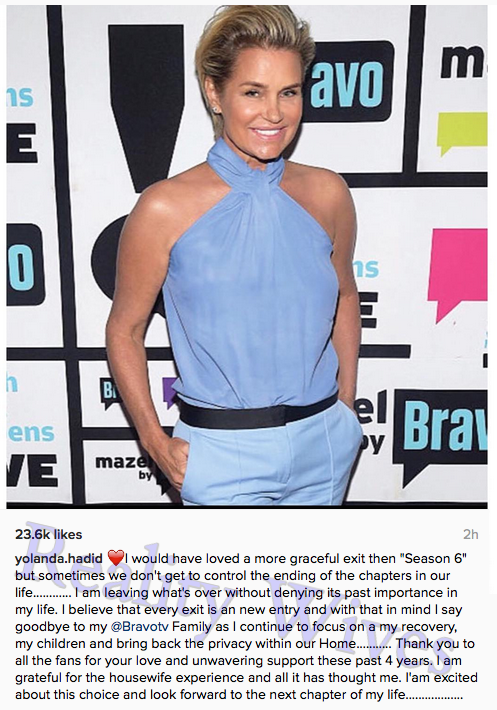 Are you glad she quit?

My little birdies tell me that she was actually fired due to her clashing with production favorites Lisa V and Kyle, but wanted to look graceful with an exit announcement on social media. Really?

Yolanda joined RHOBH for season 3. During season 6 her battle with Lyme disease was debated by those questioning how sick she actually was. It was even suggested she may even have Munchausen Sydrome – causing yourself and others to think you are sick. Her marriage to David Foster also broke down too, which was also documented on the hit show.

Last week we reported that Kathryn Edwards was fired from the Real Housewives Of Beverly Hills after only one season.

Lisa Vanderpump, Kyle Richards, Lisa Rinna and Erika Girardi are supposedly returning to RHOBH. What are your thoughts? Post your comments below.