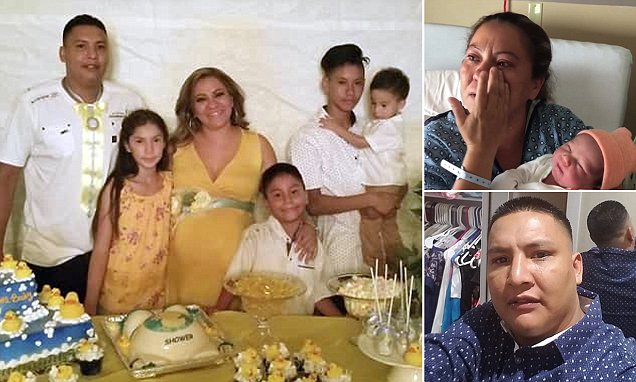 A California man detained by immigration agents while he was driving his pregnant wife to the hospital for a scheduled C-section is wanted in connection to a murder in Mexico.

Joel Arrona Lara's arrest in San Bernardino, California on Wednesday prompted outrage after his wife Maria del Carmen Venegas revealed she was forced to drive herself to the hospital to give birth.

But Immigration and Customs Enforcement officials have since revealed that Arrona, 35, was detained because he was wanted on an outstanding arrest warrant in a homicide case in Mexico.

Venegas, 32, said she and her husband were driving to the hospital last week when they stopped for gas in San Bernardino, just east of Los Angeles. 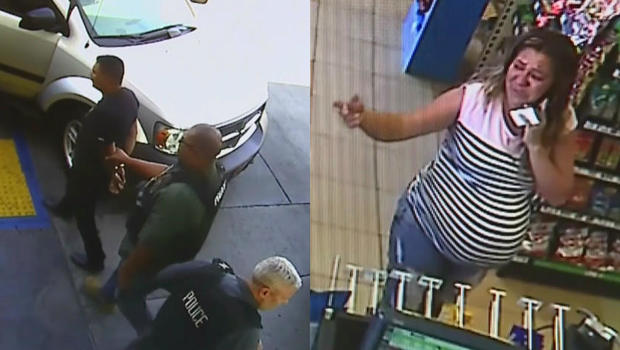 Surveillance footage shows two vehicles immediately flank the couple's van after they pulled into the gas station. ICE agents questioned the couple and asked for identification.

Venegas said she provided hers but that Arrona had left his at home in their rush to the hospital.

The surveillance footage shows the agents handcuffing Arrona and taking him away, leaving a sobbing Venegas alone at the gas station.

Venegas said she drove herself to the hospital for a scheduled cesarean section for the birth of her fifth child.

'I feel terrible,' Venegas said in a telephone interview from the hospital as her newborn son Damian cried in the background.

'We need him now more than ever.'

Venegas said she and her husband came to the US 12 years ago from the city of Leon in the central Mexican state of Guanajuato. They do not have legal authorization to live in the US and all five of their children are US citizens.

Venegas said her husband is a hard worker and the sole provider of the family.

She claimed her husband had never committed any crimes.

Authorities released a statement Saturday afternoon saying Arrona 'was brought to ICE's attention due to an outstanding warrant issued for his arrest in Mexico on homicide charges'.

Though the team prioritizes arresting immigrants who are transnational gang members, child sex offenders and those who've had previous convictions for violent crimes, the agency's statement said it 'will no longer exempt classes or categories of removable aliens from potential enforcement'.

'All of those in violation of the immigration laws may be subject to immigration arrest, detention and, if found removable by final order, removal from the United States,' the statement said.

Emilio Amaya Garcia, director of the San Bernardino Community Service Center, said his nonprofit group is providing legal help to Venegas and Arrona, will file a motion on Monday for an immigration court to set a bail hearing for Arrona and will ask that his removal proceedings be canceled.

Garcia did not respond to messages and calls for comment about the arrest warrant in Mexico.